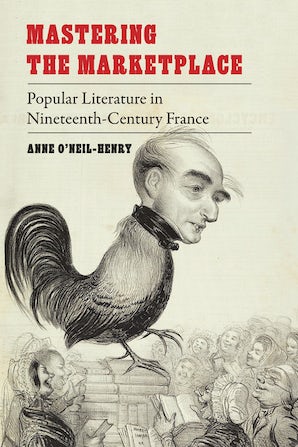 Mastering the Marketplace examines the origins of modern mass-media culture through developments in the new literary marketplace of nineteenth-century France and how literature itself reveals the broader social and material conditions in which it is produced. Anne O’Neil-Henry examines how French authors of the nineteenth century navigated the growing publishing and marketing industry, as well as the dramatic rise in literacy rates, libraries, reading rooms, literary journals, political newspapers, and the advent of the serial novel.

O’Neil-Henry places the work of canonical author Honoré de Balzac alongside then-popular writers such as Paul de Kock and Eugène Sue, acknowledging the importance of “low” authors in the wider literary tradition. By reading literary texts alongside associated advertisements, book reviews, publication histories, sales tactics, and promotional tools, O’Neil-Henry presents a nuanced picture of the relationship between “high” and “low” literature, one in which critics and authors alike grappled with the common problem of commercial versus cultural capital.

Through new literary readings and original archival research from holdings in the United States and France, O’Neil-Henry revises existing understandings of a crucial moment in the development of industrialized culture. In the process, she discloses links between this formative period and our own, in which mobile electronic devices, internet-based bookstores, and massive publishing conglomerates alter—once again—the way literature is written, sold, and read.

Anne O’Neil-Henry is an assistant professor of French at Georgetown University.

"Anne O'Neil-Henry's new book draws on an extraordinarily diverse corpus of novels, catalogues, newspapers, advertisements, reviews, and correspondence from the early to mid-nineteenth century to illustrate the influences on, and responses to, the changing literary market. . . . In writing about her authors' mastery of the marketplace, O'Neil-Henry in turn demonstrates her own mastery of detail, distilling material from a variety of sources and marshaling it into the service of her focused argument with admirable lucidity."—Adam Cutchin, Nineteenth-Century French Studies
"In Mastering the Marketplace: Popular Literature in Nineteenth-Century France, Anne O'Neil-Henry delivers a clear and nuanced reading of the literary field during the July Monarchy and of the most popular novelists who operated within it, successfully showing how the boundaries of high and low on which the notion of popular literature depends were never as fixed as they seemed to critics, either then or today. . . . Mastering the Marketplace goes a long way toward helping readers navigate the ambiguities and contradictions that make the nineteenth century's many different forms of popular literature so compelling."—Bettina Lerner, H-France
"This book is a welcome addition to a number of studies that provide new insights into the July Monarchy as a site of modernity."—Whitney Walton, H-France
"The depth of O'Neil-Henry's analyses and her consideration of cultural capital vs. commercial capital gives the reader a new perspective on the literature of all levels produced at this time."—Sharon L. Fairchild, French Review
“A model of interdisciplinary research, presented with gratifying clarity. Mastering the Marketplace makes original contributions to the cultural study of early to mid-nineteenth-century France on a number of fronts.”—Andrea Goulet, professor of French at the University of Pennsylvania and author of Legacies of the Rue Morgue: Science, Space, and Crime Fiction in France

“Unique in the way that it examines the paradoxes of what we now consider ‘low’ and ‘high’ literature against a social framework remarkably like our own. . . . Eminently readable.”—Elizabeth Emery, professor of French at Montclair State University and author of Photojournalism and the Origins of the French Writer House Museum (1881–1914): Privacy, Publicity, and Personality