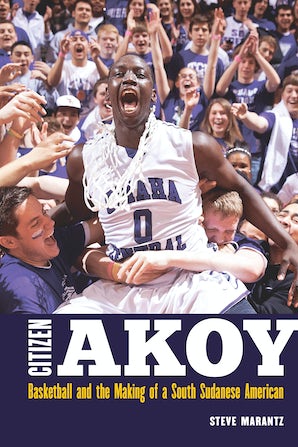 Basketball and the Making of a South Sudanese American

Akoy Agau led Omaha Central High School to four straight high school basketball state championships (2010–13) and was a three‑time All‑State player. One of the most successful high school athletes in Nebraska’s history, he’s also a South Sudanese refugee. At age four, Akoy and his family fled Sudan during the Second Sudanese Civil War, and after three years in Cairo, they came to Maryland as refugees. They arrived in Omaha in 2003 in search of a better future.

In Omaha the Agaus joined the largest South Sudanese resettlement population in the United States. While federal resources and local organizations help refugees with housing, health care, and job placement, the challenge to assimilate culturally was particularly steep. For Akoy basketball provided a sense of belonging and an avenue to realize his potential. He landed a Division 1 basketball scholarship to Louisville for a year and a half, then played at Georgetown for two injury‑plagued seasons before he graduated in the spring of 2017. With remaining eligibility, he played for Southern Methodist University while pursuing a graduate degree.

In a fluid, intimate, and joyful narrative, Steve Marantz relates Akoy’s refugee journey of basketball, family, romance, social media, and coming of age at Nebraska’s oldest and most diverse high school. Set against a backdrop of the South Sudanese refugee community in Omaha, Marantz provides a compelling account of the power of sports to blend cultures in the unlikeliest of places.

Steve Marantz is an Omaha Central graduate and the author of The Rhythm Boys of Omaha Central: High School Basketball at the ’68 Racial Divide (Nebraska, 2011). He has worked as a writer, researcher, and producer for ESPN and has covered sports, government, and politics for the Kansas City Star, Boston Globe, and Boston Herald. His podcast,“That Championship Season,” features great champions and their moments in history.

Listen to That Championship Season podcast episode about Citizen Akoy.

"Marantz’s book is a subtle plea for another path, a path of openness and inclusion that recognizes a common humanity across cultural divides. For basketball fans and readers interested and invested in Omaha’s past, present, and future, Citizen Akoy should be of great interest."—Paul Emory Putz, Nebraska History
“[Citizen Akoy] is a mesmerizing and enjoyable story of Akoy, his family, his romance, his trials and tribulations, and most importantly, of America. This well-researched book is a gift to lovers of basketball. It is a must-read for basketball fans.”—Washington Book Review

“I’m convinced that the greatest basketball player in the next one hundred years will be a Dinka tribesman originally from southern Sudan. Size and grace will win the day. Akoy Agau will be mentioned as one of the building blocks in this history. Here is his amazing story. Magic abounds.”—Leigh Montville, author of Manute: The Center of Two Worlds and Sting Like a Bee
“Akoy’s amazing journey from refugee to basketball star isn’t just about sports. It’s a story of growing up, transcending race, and pursuing dreams, and Marantz tells it well.”—Henry Cordes, staff writer for the Omaha World-Herald and author of Unbeatable and Devaney
“The antidote to anti-immigrant rhetoric, Citizen Akoy tells the vivid story of the refugee as the hero of our time, one Akoy Agau, a teenage basketball star who becomes an ambassador for sports-crazy white Nebraska. Thrilling—a must-read for anyone excited by what it takes to be an American today.”—Terese Svoboda, author of Anything That Burns You: A Portrait of Lola Ridge, Radical Poet

Listen to the author's podcast about Citizen Akoy. 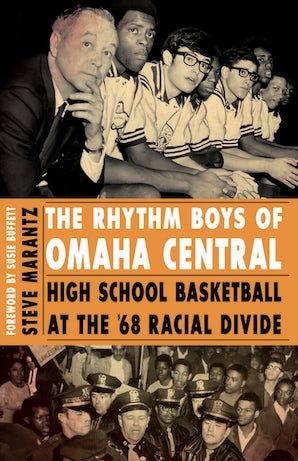 The Rhythm Boys of Omaha Central

Steve Marantz
With a foreword by Susie Buffett