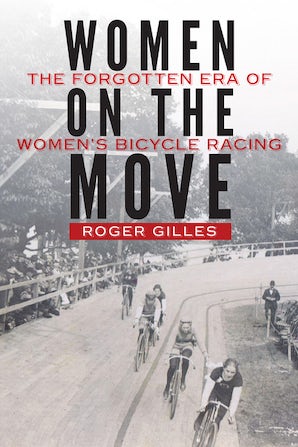 Women on the Move

The 1890s was the peak of the American bicycle craze, and consumers, including women, were buying bicycles in large numbers. Despite critics who tried to discourage women from trying this new sport, women took to the bike in huge numbers, and mastery of the bicycle became a metaphor for women’s mastery over their lives.

Spurred by the emergence of the “safety” bicycle and the ensuing cultural craze, women’s professional bicycle racing thrived in the United States from 1895 to 1902. For seven years, female racers drew large and enthusiastic crowds across the country, including Cleveland, Detroit, Indianapolis, Chicago, Minneapolis, St. Louis, Kansas City, and New Orleans—and many smaller cities in between. Unlike the trudging, round-the-clock marathons the men (and their spectators) endured, women’s six-day races were tightly scheduled, fast-paced, and highly competitive. The best female racers of the era—Tillie Anderson, Lizzie Glaw, and Dottie Farnsworth—became household names and were America’s first great women athletes. Despite concerted efforts by the League of American Wheelmen to marginalize the sport and by reporters and other critics to belittle and objectify the women, these athletes forced turn-of-the-century America to rethink strongly held convictions about female frailty and competitive spirit.

By 1900 many cities began to ban the men’s six-day races, and it became more difficult to ensure competitive women’s races and attract large enough crowds. In 1902 two racers died, and the sport’s seven-year run was finished—and it has been almost entirely ignored in sports history, women’s history, and even bicycling history. Women on the Move tells the full story of America’s most popular arena sport during the 1890s, giving these pioneering athletes the place they deserve in history.

“Gilles’s book is a window into a virtually unknown time in women’s sports, and it is important because it adds to the history of female athletes who have overcome so many obstacles to be able to compete. It’s also more evidence that women have always been more suited to sports than they’ve been given credit for, and that when they have the opportunity to train, they’ve always been just as capable as the men.”—Britni de la Cretaz, Guardian
“In focusing on these pioneers of American women’s athleticism, Gilles has provided a much needed examination of a little-known aspect of American women’s history in general.”—K.B. Nutter, Choice

"Roger Gilles's Women on the Move: The Forgotten Era of Women's Bike Racing gives due recognition to the achievements of Anderson and her rivals, breathes fresh life into stories that once gripped thousands of sports fans across America."—Feargal McKay, Podium Cafe
"Gilles has resurrected a time of women’s racing that we today didn’t know even existed. Thanks to Women on the Move, we can catch up and learn about pioneer women bike racers."—Peter Joffre Nye, Bike Race Info
"Gilles . . . has finally brought back to light these long-forgotten heroines."—Peter Joffre Nye, U.S. Bicycling Hall of Fame
"Fans of sports, bike racing, and amazingly talented female athletes will delight in reading—and picturing as they ’round the corner—Women on the Move."—Evan Friss, Missouri Historical Review
"Women on the Move is an enjoyable read, and Gilles is clearly passionate about the subject matter. This book will attract academic and non-academic audiences alike because of its accessible style and fascinating content. Gilles brings to life an important piece of cycling history that deserves much more attention. Tillie Anderson and her fellow cycliennes demonstrate how much the bicycle was a revolutionary piece of technology that transformed how men and women interacted, exercised, and lived their lives."—Rebecca Beausaert, Journal of Arizona History
"An important and compelling story. It is the fact that Giles has uncovered this hidden history that makes his book such a worthy contribution."—Robert J. Turpin, Technology and Culture
“Women on the Move is a much-needed look at the history of sports and the challenges—and advancement—of women in America. A must-read for sports fans, equality advocates, and history enthusiasts.”—Kathryn Bertine, author of The Road Less Taken and documentary filmmaker of Half The Road
“Roger Gilles shines a much-deserved light on 1890s women cyclists, bringing back to life Tillie Anderson, Dottie Farnsworth, and their sisters on wheels. Thoroughly researched, this is a rollicking read—a treasure.”—Peter Joffre Nye, author of Hearts of Lions and The Fast Times of Albert Champion
“Gilles meticulously re-creates a bygone era in American professional cycling—an era forgotten no longer.”—M. Ann Hall, author of The Girl and the Game and Feminism and Sporting Bodies
“A vivid portrait of the forgotten heroines of the bicycle boom. A delightful and inspiring revelation.”—David Herlihy, author of Bicycle: The History