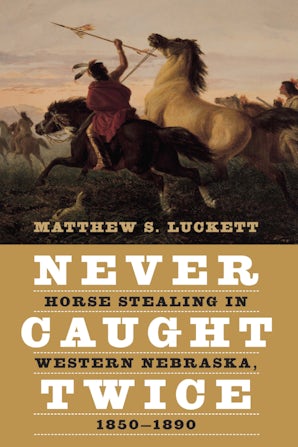 Never Caught Twice presents the untold history of horse raiding and stealing on the Great Plains of western Nebraska. By investigating horse stealing by and from four Plains groups—American Indians, the U.S. Army, ranchers and cowboys, and farmers—Matthew S. Luckett clarifies a widely misunderstood crime in Western mythology and shows that horse stealing transformed plains culture and settlement in fundamental and surprising ways.

From Lakota and Cheyenne horse raids to rustling gangs in the Sandhills, horse theft was widespread and devastating across the region. The horse’s critical importance in both Native and white societies meant that horse stealing destabilized communities and jeopardized the peace throughout the plains, instigating massacres and murders and causing people to act furiously in defense of their most expensive, most important, and most beloved property. But as it became increasingly clear that no one legal or military institution could fully control it, would-be victims desperately sought a solution that would spare their farms and families from the calamitous loss of a horse. For some, that solution was violence. Never Caught Twice shows how the story of horse stealing across western Nebraska and the Great Plains was in many ways the story of the old West itself.

Matthew S. Luckett is a lecturer of history and an academic program coordinator at California State University–Dominguez Hills.

"Never Caught Twice is highly recommended to western scholars and other persons interested in western Nebraska history. Luckett's witty character makes for an engaging conversation between the author, the reader, and the past."—Broc Anderson, Nebraska History
“This is an intriguing and deeply significant contribution to the ongoing effort to demythologize the Wild West and adds an important new layer to the search for an identifiable legal culture in Nebraska and Great Plains history.”—Mark Scherer, coauthor of Echo of Its Time: The History of the Federal District Court of Nebraska, 1867–1933
"Luckett has produced a fascinating study, which deserves our attention."—Chuck Parsons, Tombstone Epitaph
“Never Caught Twice shows how ‘creating and protecting private property’—livestock on the hoof—rather than ‘the advent of law and order’ defined America’s frontier settlement. Matthew Luckett is an excellent writer, deep thinker, and brave scholar.”—Will Bagley, author of So Rugged and Mountainous: Blazing the Trails to Oregon and California
“Despite what we think we know about horse theft, this is the first effort to pull it all together into a single study. It is good stuff!”—Mark R. Ellis, author of Law and Order in Buffalo Bill’s Country: Legal Culture and Community on the Great Plains, 1867–1910

List of Illustrations
List of Maps
Preface
Acknowledgments
Introduction: Maps, Meridians, and Mounts in Western Nebraska
1. You Must Watch Your Horses
2. Theft Cultures
3. The Horse Wars
4. A Most Tempting Business
5. From Thieves to Villains
6. When Horse Thieves Were Hanged
Epilogue: The Old West in Miniature
Notes
Bibliography
Index