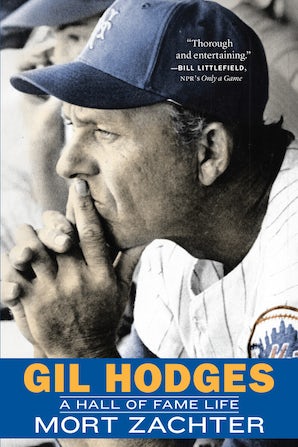 A Hall of Fame Life

In descriptions of athletes, the word “hero” is bandied about and liberally attached to players with outstanding statistics and championship rings. Gil Hodges: A Hall of Fame Life is the story of a man who epitomized heroism in its truest meaning, holding values and personal interactions to be of utmost importance throughout his life—on the diamond, as a marine in World War II, and in his personal and civic life. A New York City icon and, with the Brooklyn Dodgers, one of the finest first basemen of all time, Gil Hodges (1924–72) managed the Washington Senators and later the New York Mets, leading the 1969 “Miracle Mets” to a World Series championship. A beloved baseball star, Hodges was also an ethical figure whose sturdy values both on and off the field once prompted a Brooklyn priest to tell his congregation to “go home, and say a prayer for Gil Hodges” in order to snap him out of the worst batting slump of his career.

Mort Zachter examines Hodges’s playing and managing days, but perhaps more important, he unearths his true heroism by emphasizing the impact that Hodges’s humanity had on those around him on a daily basis. Hodges was a witty man with a dry sense of humor, and his dignity and humble sacrifice sometimes masked a temper that made Joe Torre refer to him as the “Quiet Inferno.” The honesty and integrity that made him so popular to so many remained his defining elements. Firsthand interviews of the many soldiers, friends, family, former teammates, players, and managers who knew and respected Hodges bring the totality of his life into full view, providing a rounded appreciation for this great man and ballplayer.

Mort Zachter is a former tax attorney and adjunct tax professor at New York University. His first book, Dough: A Memoir, won the 2006 Association of Writers and Writing Programs Book Prize for nonfiction.

“Zachter’s account of Hodges’s exploits is thorough and entertaining, and his case that his favorite player probably ought to be in the Hall of Fame is convincing.”—Bill Littlefield, NPR’s Only a Game

"Fans who remember the Brooklyn Bums and the Miracle Mets will find this a must-read."—Jim Burns, Library Journal
“The definitive and wonderfully told tale of a baseball icon. Mort Zachter has given Gil Hodges the biography he has long deserved.”—Michael Shapiro, professor of journalism at Columbia University and author of The Last Good Season: Brooklyn, the Dodgers and Their Final Pennant Race Together

“Whether focusing on Hodges the Hoosier, the marine on Okinawa, the home run–hitting slugger, or the Brooklynite on Bedford Avenue, Mort Zachter has given us Gil, right down to the nub of his Marlboro. His mincing steps to the mound are remembered along with the candles lit in church and the day Brooklyn’s heart skipped a beat with his. This one spikes high into your heart; the Hodges epic is a lesson in humanity for all seasons.”—Bob McGee, author of The Greatest Ballpark Ever: Ebbets Field and the Story of the Brooklyn Dodgers
"Mort Zachter captures the essence of Hodges in his biography."—Bob D'Angelo, Tampa Tribune

“As a Marine, one of Brooklyn’s beloved Boys of Summer, and the manager of the Miracle Mets, Gil Hodges lived a great American life, though one cut too short. In these pages you understand how Hodges defined what it meant to be a role model in a golden age.”—Tom Verducci, senior writer for Sports Illustrated

“Zachter brings the same grace and precision to the page that Hodges brought to first base at Ebbets Field and with methodical research, insight, and pure affection gives life to the man behind the astounding stats, proving once and for all that Hodges truly belongs in the National Baseball Hall of Fame. Kudos to Mort Zachter for giving a beloved Brooklyn legend his due.”—Marty Markowitz, former Brooklyn Borough president

Prologue: His Reputation Preceded Him

11. The Day Next Year Arrived

12. Where in America Would You See That?

14. The Worst Place Ever

19. On the Doorstep of Respectability

20. The Mets Get Serious

23. Struggles in the Spotlight

Afterword: Hodges and the Hall 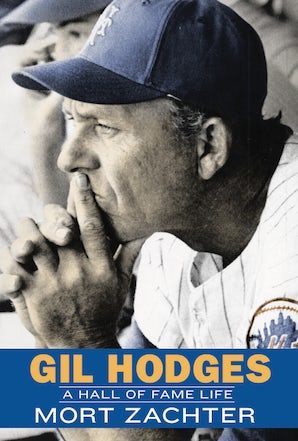