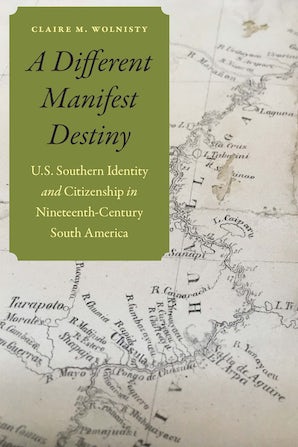 The South possessed an extensive history of looking outward, specifically southward, to solve internal tensions over slavery and economic competition in the 1820s through the 1860s. Nineteenth-century southerners invested in their futures, and in their identity as southerners, when they expanded their economic and proslavery connections to Latin America, seeking to establish a vast empire rooted in slavery that stretched southward to Brazil and westward to the Pacific Ocean. For these modern expansionists, failure to cement those connections meant nothing less than the death of the South.

In A Different Manifest Destiny Claire M. Wolnisty explores how elite white U.S. southerners positioned themselves as modern individuals engaged in struggles for transnational power from the antebellum to the Civil War era. By focusing on three groups of people not often studied together—filibusters, commercial expansionists, and postwar southern emigrants—Wolnisty complicates traditional narratives about Civil War–era southern identities and the development of Manifest Destiny. She traces the ways southerners capitalized on Latin American connections to promote visions of modernity compatible with slave labor and explores how southern–Latin American networks spanned the years of the Civil War.

Claire M. Wolnisty is an assistant professor of history at Austin College.

"Wolnisty's study of a 'different Manifest Destiny,' combining filibusters, commercial expansion, and southern emigrants within a single work, is a new and commendable endeavor. . . . This book contributes to a burgeoning scholarly literature about the important nineteenth-century U.S. commercial and political campaigns in Latin America that will be of interest to a wide range of scholars."—Alan P. Marcus, Journal of Interdisciplinary History
"Wolnisty’s work points to fascinating new directions in the study of nineteenth-century southern expansionism."—Roberto Saba, H-CivWar
“Wolnisty’s brisk prose and crisp analysis refocus our concepts of Manifest Destiny southward, specifically to Nicaragua and Brazil, by systematically examining how fear, ambition, and hubris fed an expansionism in search of a future anchored in both slavery and technological advances.”—Laura Jarnagin Pang, author of A Confluence of Transatlantic Networks: Elites, Capitalism, and Confederate Migration to Brazil
“A Different Manifest Destiny meticulously unites three branches of southern history—filibusters, commercial expansionists, and southern emigrants—to provide a distinctive, thoughtful inspection and reorientation of an outward-looking South forged through transnational circuits across Latin America.”—Todd W. Wahlstrom, author of The Southern Exodus to Mexico: Migration across the Borderlands after the American Civil War
"Wolnisty illuminates the centrality of Latin America to the regional imagination of white southerners during the ‘long’ Civil War. Her discussion of the South’s introduction of steamships and railroads to Brazil is an important contribution to our understanding of the compatibility of chattel slavery with technological modernism."—Patrick J. Kelly, coeditor of Living on the Edge: Texas during the Civil War and Reconstruction