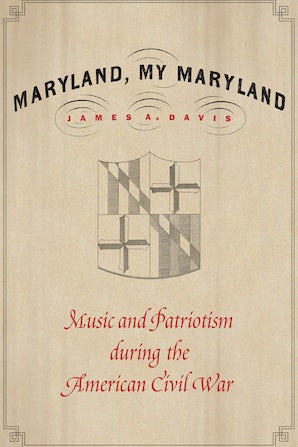 Music and Patriotism during the American Civil War

Historians have long treated the patriotic anthems of the American Civil War as colorful, if largely insignificant, side notes. Beneath the surface of these songs, however, is a complex story. “Maryland, My Maryland” was one of the most popular Confederate songs during the American Civil War, yet its story is full of ironies that draw attention to the often painful and contradictory actions and beliefs that were both cause and effect of the war. Most telling of all, it was adopted as one of a handful of Southern anthems even though it celebrated a state that never joined the Confederacy.

In Maryland, My Maryland: Music and Patriotism during the American Civil War James A. Davis illuminates the incongruities underlying this Civil War anthem and what they reveal about patriotism during the war. The geographic specificity of the song’s lyrics allowed the contest between regional and national loyalties to be fought on bandstands as well as battlefields and enabled “Maryland, My Maryland” to contribute to the shift in patriotic allegiance from a specific, localized, and material place to an ambiguous, inclusive, and imagined space. Musical patriotism, it turns out, was easy to perform but hard to define for Civil War–era Americans.

James A. Davis is a professor of musicology at the School of Music, State University of New York at Fredonia. He is the author of Music along the Rapidan: Civil War Soldiers, Music, and Community during Winter Quarters, Virginia, 1863–1864 (Nebraska, 2014) and editor of several books, including The Arts and Culture of the American Civil War.

"Maryland, My Maryland is a strong and important contribution to the field of Civil War history and hopefully will inspire others to take up their own microhistory research to shed more light on the most divisive period in US history."—David K. Graham, H-CivWar
"Davis gives us some useful and often insightful observations about life, society, and popular culture during the war, and is at times quite amusing. Maryland, My Maryland is a good read for anyone with an interest in the Home Front during the war, or in American musical history, and, of course, in the still unfinished issues that brought about the war."—A. A. Nofi, Strategy Page
"Moving chronologically through the Civil War years, Davis's book meticulously explores the song's origins, reception, use, and reuse, detailing the tension between the nation's love of a good melody and its conflicting ideas of what constitutes a good cause."—Stephanie Dunson, Journal of Southern History
“James Davis sheds light on a crucial but understudied dimension of the conflict: the role of music in inspiring devotion to the causes for which both sides fought. He demonstrates an impressive command of the historical and musicological sources necessary to make his analysis persuasive.”—Michael W. Schaefer, professor of English at the University of Central Arkansas and author of A Reader’s Guide to the Short Stories of Stephen Crane
“Once again Davis has approached the familiar subject of music in the Civil War with a remarkably fresh take on one of the era’s most popular songs. His latest contribution raises the level of academic inquiry and will stimulate new investigations into broader contexts for music that has often been mentioned but seldom taken seriously.”—Candace Bailey, professor of musicology at North Carolina Central University and author of Music and the Southern Belle: From Accomplished Lady to Confederate Composer
“Davis’s historical acumen is impressive, and, combined with his knowledge of musicology, style, phrasing, and other numerous features of song-making, the reader is treated to a multidimensional view of the song. Maryland, My Maryland is not only readable; it is very enjoyable, even a page-turner. Davis is able to write to both the layman and the scholar without making either of them feel that they are trespassing on foreign ground. Anyone interested in the Civil War—really anyone who cares about the subject—will find great treasures in it.”—Randal Allred, professor of English at Brigham Young University–Hawaii

Contents
List of Illustrations
Acknowledgments
Introduction: Patriotic Music and the Civil War
1. Maryland and the Coming of War: Bargain Patriotism and the Need for an Anthem
2. Spring 1861: The Pratt Street Riot and the Birth of a Song
3. “Maryland, My Maryland”: Lyrics, Music, and Publication
4. Fall 1861: The Cary Invincibles, Flags, and Symbolic Patriotism
5. Spring 1862: Marylanders, the Military, and Regionalism
6. Summer 1862: Tropes, Class, and the Rise of an Anthem
7. Fall 1862: Antietam and the Battle of Parodies
8. Spring 1863: pows, Civilians, and Military Patriotism
9. Summer 1863: Gettysburg, Slavery, and the Patriotism of Sacrifice
10. Fall 1863: Women, Hospitals, and Diverging Audiences
11. 1864: Monocacy and the Victory of Song over State
12. 1865: Performing Patriotism and Nostalgia after Appomattox
Epilogue: “Maryland, My Maryland” after the War
Notes
Bibliography
Index