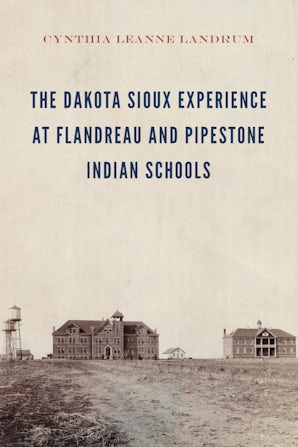 The Dakota Sioux Experience at Flandreau and Pipestone Indian Schools

The Dakota Sioux Experience at Flandreau and Pipestone Indian Schools illuminates the relationship between the Dakota Sioux community and the schools and surrounding region, as well as the community’s long-term effort to maintain its role as caretaker of the “sacred citadel” of its people.

Cynthia Leanne Landrum explores how Dakota Sioux students at Flandreau Indian School in South Dakota and at Pipestone Indian School in Minnesota generally accepted the idea that they should attend these particular boarding institutions because they saw them as a means to an end and ultimately as community schools. This construct operated within the same philosophical framework in which some Eastern Woodland nations approached a non-Indian education that was simultaneously tied to long-term international alliances between Europeans and First Peoples beginning in the seventeenth and eighteenth centuries.

Landrum provides a new perspective from which to consider the Dakota people’s overt acceptance of this non-Native education system and a window into their ongoing evolutionary relationships, with all of the historic overtures and tensions that began the moment alliances were first brokered between the Algonquian Confederations and the European powers.

Cynthia Leanne Landrum teaches history and Indigenous studies at Portland State University and Clark College. She is the author of The Valley of the Kings: Rehabilitation of the People of the Columbia River and Pacific Rim through Ceremonialism.

"Landrum has produced an excellent monograph on the history of the Flandreau and Pipestone schools. The book demonstrates how Dakota peoples embraced the educational process at these institutions as a means to confront banishment, displacement, and attempted erasure by the U.S. government during the nineteenth and twentieth centuries."—John R. Legg, Middle West Review
"The Dakota Sioux Experience works well as a case study of federal Indian boarding schools and their impact on Native communities. Drawing from archived government reports, as well as personal correspondence, memoirs, and oral history interviews from former students, Landrum presents a detailed, balanced history of the schools’ construction, recruitment strategies, academic curricula, and vocational opportunities."—Rose Buchanan, Native American and Indigenous Studies
"This book is an important contribution to the growing literature on American Indians and boarding schools."—Elise Boxer, North Dakota History
"This book will appeal to scholars, historians, federal boarding school descendants, Dakota people, and all Native people."—Nancy F. Carlson, Nebraska History
“This study of the Flandreau and Pipestone Indian Schools is important because it covers the two schools in great depth while also linking various historical contexts and periods. This book will appeal to both scholars in the field and to descendants of the schools’ students. I especially appreciate Landrum’s inclusion of the specter of race science regarding student evaluations at the schools. She also has further clarified and added greater nuance to the discussion of the Puritan ‘praying towns’ and provided a valuable discussion of the self-pedagogy of the Five Civilized Tribes.”—Hayes P. Mauro, associate professor of art and design at CUNY’s Queensborough Community College and author of The Art of Americanization at the Carlisle Indian School
“Landrum’s work provides thorough institutional histories of the Flandreau and Pipestone boarding schools and explains how changing federal Indian policies impacted those who taught, administered, and attended them. She also includes a collection of personal reflections, some heartbreaking and some uplifting, by those who passed through those schools.”—Tim Garrison, professor of history at Portland State University and coeditor of The Native South: New Histories and Enduring Legacies