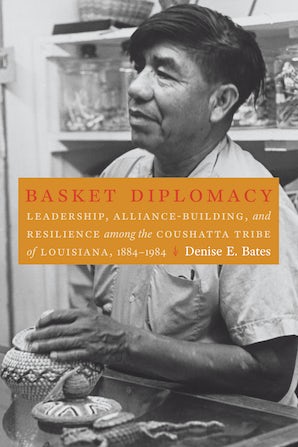 Leadership, Alliance-Building, and Resilience among the Coushatta Tribe of Louisiana, 1884-1984

Before the Coushatta Tribe of Louisiana became one of the state’s top private employers—with its vast landholdings and economic enterprises—they lived well below the poverty line and lacked any clear legal status. After settling in the Bayou Blue in 1884, they forged friendships with their neighbors, sparked local tourism, and struck strategic alliances with civic and business leaders, aid groups, legislators, and other tribes. Coushattas also engaged the public with stories about the tribe’s culture, history, and economic interests that intersected with the larger community, all while battling legal marginalization exacerbated by inconsistent government reports regarding their citizenship, treaty status, and eligibility for federal Indian services. Well into the twentieth century, the tribe had to overcome several major hurdles, including lobbying the Louisiana legislature to pass the state’s first tribal recognition resolution (1972), convincing the Department of the Interior to formally acknowledge the Coushatta Tribe through administrative channels (1973), and engaging in an effort to acquire land and build infrastructure.

Basket Diplomacy demonstrates how the Coushatta community worked together—each generation laying a foundation for the next—and how they leveraged opportunities so that existing and newly acquired knowledge, timing, and skill worked in tandem.

Denise E. Bates is a historian and an assistant professor of leadership and interdisciplinary studies at Arizona State University. She is the author of The Other Movement: Indian Rights and Civil Rights in the Deep South and editor of We Will Always Be Here: Native Peoples on Living and Thriving in the South.

"Denise E. Bates's Basket Diplomacy: Leadership, Alliance-Building, and Resilience among the Coushatta Tribe of Louisiana, 1884–1984 is a fascinating history of the long fight for home, community, and federal recognition by the Coushatta after finally settling in Louisiana after a series of forced relocations due to persistent settler encroachment in their original homelands and subsequent territories. Bates covers a century of the tribe's long history, during which the community faced multiple challenges, including settling into their new location; retaining community connections across a geography of scattered private landholdings (rather than a communal territory) in a variety of Louisiana parishes; poverty; the lack/attainment/removal of federal resources; the long-standing absence of state, and as previously mentioned, federal, recognition of their legitimate claims of Indigeneity and nationhood—all against a background of the deep-seated racism of the Jim Crow South."—Paul McKenzie-Jones, H-AmIndian
"Drawing from oral histories, personal interviews, newspapers, and archival records, Bates takes readers through the Coushattas' fight against poverty and their struggle to secure land. . . . In Basket Diplomacy, Bates has crafted a story that incisively critiques federal recognition without losing sight of the community at the heart of this story."—Elizabeth Ellis, Native American and Indigenous Studies
"Basket Diplomacy contributes significantly to our understanding of Indigenous peoples in the South, Indigenous leadership, and tribal relationships with local, state, and federal institutions. It reminds us that the experiences of Native peoples in the South are not monolithic and that community histories remain essential to understanding the diversity of Native experiences."—Jay Precht, Journal of Southern History
“Bates skillfully explores the world of the Coushatta Tribe of Louisiana, concentrating on how leaders successfully rebuilt their nation over a hundred-year period. . . . Basket Diplomacy is Indigenous and Southern history at its best and a must-read for those interested in Native American history.”—Brooke Bauer, assistant professor of history and Native American studies at the University of South Carolina Lancaster
“Bates masterfully weaves historic documentation with tribal interviews to tell the political, economic, and cultural history of the [Coushatta] Tribe over the past century through tribal voices. The result is a vital book for historians, Indigenous scholars, and tribal communities alike.”—Linda Langley, tribal historic preservation officer for the Coushatta Tribe of Louisiana
“Basket Diplomacy tells the remarkable story of how the Coushatta tribe transformed from a tiny, impoverished Louisiana Indian community into a nation. It follows the efforts of several generations of Coushattas culminating in the work of the tribe’s great leader Ernest Sickey during the 1970s and 1980s. This book is an engaging read that captures critical parts of Louisiana and American Indian history while simultaneously offering valuable leadership lessons.”—Adam Crepelle, visiting professor at Southern University Law Center

List of Illustrations
Acknowledgments
Introduction
Chapter 1. “Don’t Forget Your Gumbo Bowl”: Building a Life at Bayou Blue
Chapter 2. Refusing to Be Overlooked: Tribal Leadership and the Introduction of Federal Indian Services, 1913–1951
Chapter 3. Abandoned, Not Terminated: The Aftermath and Response to the Unilateral Withdrawal of Federal Services, 1951–1962
Chapter 4. Poor but Not Hopeless: Relentless Advocacy Efforts and the Opening of the First Tribal Enterprise, 1962–1969
Chapter 5. An Unusual Road to Recognition: Uncovering Administrative Oversights and Drawing Louisiana into Indian Affairs, 1969–1973
Chapter 6. Controlling the Conversation: Reshaping the Narrative and Building a Tribal Nation, 1973–1984
Epilogue, by Chairman David Sickey
Appendix
Notes
Bibliography
Index