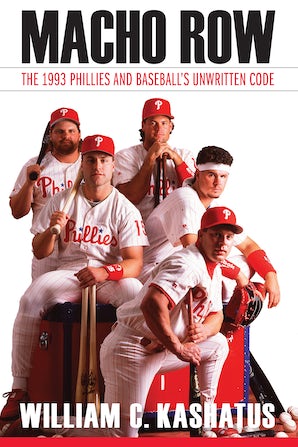 The 1993 Phillies and Baseball's Unwritten Code

Colorful, shaggy, and unkempt, misfits and outlaws, the 1993 Phillies played hard and partied hard. Led by Darren Daulton, John Kruk, Lenny Dykstra, and Mitch Williams, it was a team the fans loved and continue to love today. Focusing on six key members of the team, Macho Row follows the remarkable season with an up-close look at the players’ lives, the team’s triumphs and failures, and what made this group so unique and so successful.

With a throwback mentality, the team adhered to baseball’s Code. Designed to preserve the moral fabric of the game, the Code’s unwritten rules formed the bedrock of this diehard team whose players paid homage and respect to the game at all times. Trusting one another and avoiding any notions of superstardom, they consistently rubbed the opposition the wrong way and didn’t care. William C. Kashatus pulls back the covers on this old-school band of brothers, depicting the highs and lows and their brash style while also digging into the suspected steroid use of players on the team. Macho Row is a story of winning and losing, success and failure, and the emotional highs and lows that accompany them.

William C. Kashatus is the author of many books, including Jackie and Campy: The Untold Story of Their Rocky Relationship and the Breaking of Baseball’s Color Line (Nebraska, 2014) and Almost a Dynasty: The Rise and Fall of the 1980 World Champion Philadelphia Phillies.

"Macho Row features a lively cast of characters, players that Major League baseball will probably never witness again."—Jack Ryan, ARETE
"Macho Row is a well-documented book that broaches important themes beyond Philadelphia— steroids and sabermetrics—without delving into the detail that other studies focused on those topics have."—Craig R. Coenen, Pennsylvania History: A Journal of Mid-Atlantic Studies
“The 1993 Phillies captured the imaginations of fans with their hard-edged, take-no-prisoners attitude.”—Billy Beane, executive vice president of baseball operations for the Oakland Athletics
“The [1993] Phillies were loud, irreverent, and politically incorrect. Macho Row vividly re-creates their rowdy, memorable season, warts and all.”—Paul Hagen, former baseball writer for the Philadelphia Daily News
“Inspiring as well as tragic, Macho Row is ultimately a cautionary tale about the price some athletes pay after their playing days are over.”—Al Tielemans, photographer for Sports Illustrated