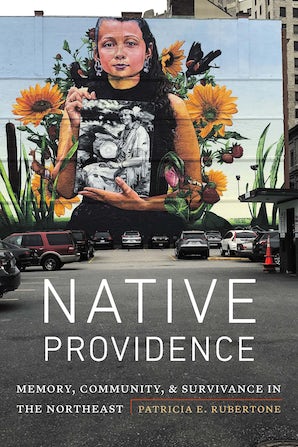 Memory, Community, and Survivance in the Northeast

A city of modest size, Providence, Rhode Island, had the third-largest Native American population in the United States by the first decade of the twentieth century. Native Providence tells their stories at this historical moment and in the decades before and after, a time when European Americans claimed that Northeast Natives had mostly vanished.

Denied their rightful place in modernity, men, women, and children from Narragansett, Nipmuc, Pequot, Wampanoag, and other ancestral communities traveled diverse and complicated routes to make their homes in this city. They found each other, carved out livelihoods, and created neighborhoods that became their urban homelands—new places of meaningful attachments. Accounts of individual lives and family histories emerge from historical and anthropological research in archives, government offices, historical societies, libraries, and museums and from community memories, geography, and landscape.

Patricia E. Rubertone chronicles the survivance of the Native people who stayed, left and returned, who faced involuntary displacement by urban renewal, who lived in Provi­dence briefly, or who made their presence known both there and in the wider indigenous and settler-colonial worlds. These individuals reenvision the city’s past through everyday experiences and illuminate documentary and spatial tactics of inequality that erased Native people from most nineteenth- and early twentieth-century history.

Patricia E. Rubertone is a professor of anthropology at Brown University. She is the author of Archaeologies of Placemaking: Monuments, Memories, and Engagement in Native North America and Grave Undertakings: An Archaeology of Roger Williams and the Narragansett Indians.

"Native Providence is a timely and politically important book as Indigenous people in the East continue to fight the pernicious and lingering trope of disappearance with histories of an historic and continuing Native presence."—Jeffrey L. Hantman, Journal for the Anthropology of North America
"Native Providence: Memory, Community, and Survivance in the Northeast intricately weaves together the biographies and movements of everyday Native individuals and families as they made their lives in the city of Providence."—Christopher J. Slaby, Western Historical Quarterly
"Rubertone offers a critical and humanistic, detailed and nuanced approach of the central role of Native people both in the past and the 'emerging modernity' of the city of Providence."—Marianne Sallum, Historical Archeology
"Rubertone's archival research is impressive, and her reading of documentary evidence—of what it reveals and what it does not—is a model for how to find Native people in the archives, particularly Indigenous subjects that are sometimes only found in traces."—Laura M. Furlan, Journal of Anthropological Research
"Rubertone has conducted meticulous. . . . This social history of survivance offers a fresh perspective on urban Indian ethnic identity in a southern New England city across two centuries."—J. H. Rubin, Choice
“[Native Providence] is revelatory—an entirely new way of looking at this old ‘thoroughfare’ city. . . . Rubertone’s innovative work . . . stands out as a model of historical archaeological analysis and practice—an embodiment of the hopes of the discipline’s founders that the skillful inter-reading of archaeological collections, geographical evidence, and what James Deetz called ‘docufacts’ can contribute to analyses that transcend the study of any one of these bodies of data separately."—Kathleen J. Bragdon, American Antiquity
"Rubertone has produced an important work for Natives and non-Natives alike, one that challenges preconceived notions of who we are as Native people as well as what we can be."—Hartman H Deetz, Native American and Indigenous Studies
“Patricia Rubertone deftly undermines the myth that cities don’t have indigenous histories or presents, and she challenges the notion that Native people whose homelands are often called ‘New England’ have disappeared. Through painstaking archival research, conversations with community members, and attention to the local landscape, Rubertone has produced a readable and usefully disorienting account of one historic city’s encounter with both settler colonialism and indigenous survivance.”—Coll Thrush, author of Indigenous London: Native Travellers at the Heart of Empire
“Native Providence is a magnificently grounded, humane study of indigenous resilience and adaptation. It recovers the complexities and contradictions of Native individuals and families who worked to make the city their own place and navigated the pressures and exclusions of settler colonialism to create their own forward-looking modernities. It places Native people and voices at the center and in doing so provocatively reorients us to a seemingly familiar city.”—Christine M. DeLucia, author of Memory Lands: King Philip’s War and the Place of Violence in the Northeast
“This is the best treatment of the urban experiences of Indians in New England to date and a model of historical recovery for the broader, burgeoning subfield of urban Indian studies.”—David J. Silverman, author of This Land Is Their Land: The Wampanoag Indians, Plymouth Colony, and the Troubled History of Thanksgiving

List of Illustrations
Preface
Acknowledgments
A Note on the Maps
Introduction: Narrating Indigeneity in a “Thoroughfare Town”
1. Fox Point: A Waterfront Homeland, Encounters at a Stopping-Over Place, and Indigenous Legibility
2. Lippitt Hill: Homelands of the Hill and Hollows, Unholy Water, and Traditional Knowledge
3. Upper South Providence: Homeland at the Crossroads, Churchgoing, and Community Making
4. Lower South Providence: Habitations by the River and Bay, Mobility, and the Urban Imaginary
5. Mashapaug Pond: The Pond Lands, from Planting Fields to Industrial Transformations
6. Federal Hill: Homeland above the River at the Town’s Doorstep, Commonplace Streets, and Uncommon Labor
7. Johnston: Homeland at the Borderlands, Powwows, and Urban Mythscapes
Epilogue: Imagining Past, Present, and Future Urbanity
Appendix: Native Residents of Providence Homelands
List of Abbreviations
Notes
Bibliography
Index