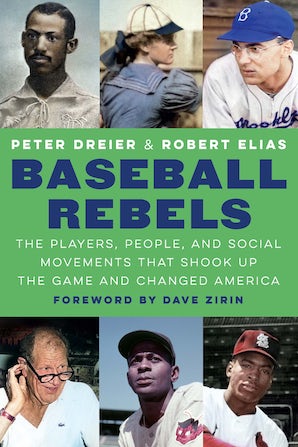 The Players, People, and Social Movements That Shook Up the Game and Changed America

Since baseball emerged in the mid-1800s to become America’s pastime, the nation’s battles over race, gender, and sexuality have been reflected on the playing field, in the executive suites, in the press box, and in the community. Some of baseball’s rebels are widely recognized, but most of them are either little known or known primarily for their baseball achievements—not their political views and activism. Everyone knows the story of Jackie Robinson breaking baseball’s color line, but less known is Sam Nahem, who opposed the racial divide in the U.S. military and organized an integrated military team that won a championship in 1945. Or Toni Stone, the first of three women who played for the Indianapolis Clowns in the previously all-male Negro Leagues. Or Dave Pallone, MLB’s first gay umpire. Many players, owners, reporters, and other activists challenged both the baseball establishment and society’s status quo.

Baseball Rebels tells stories of baseball’s reformers and radicals who were influenced by, and in turn influenced, America’s broader political and social protest movements, making the game—and society—better along the way.

Peter Dreier is E. P. Clapp Distinguished Professor of Politics and founding chair of the Urban and Environmental Policy Department at Occidental College. A former newspaper reporter, community organizer, and senior policy adviser to former Boston mayor Ray Flynn, he has authored or coauthored seven books, including The 100 Greatest Americans of the 20th Century: A Social Justice Hall of Fame. Robert Elias is a professor of politics and legal studies at the University of San Francisco. He is the author of several books, including Baseball and the American Dream: Race, Class, Gender, and the National Pastime. Dave Zirin is the author of several books, the sports editor for The Nation, and host of the weekly Edge of Sports podcast and radio show.

"Baseball Rebels conducts deep dives into the ugly past in the game. The history lessons offered through the lens of Dreier and Elias make their book a must-read."—Don Laible, Bradenton Times
"For all the progress that has been made, we're still waiting for greater minority representation in front offices, for women to be part of the game, and for LGBTQ+ individuals to feel unashamed of who they are within the context of the game. Baseball Rebels makes you feel like it's only a matter of time before that's a reality, though, and that's a really good thing."—Chris D. Davies, coveringthecorner.com
"Readers will find much in this volume that a second or third reading will bring new delight and interest."—Paul Buhle, Progressive Magazine
“Baseball is America’s game: it’s a game with an important and often-overlooked history of rebellion, and one that, with fits and starts, has helped lead the nation’s fight against racism, sexism, and homophobia. Don’t believe me? This incisive and compelling book proves it. . . . Highly recommended.”—Jonathan Eig, author of Luckiest Man and Opening Day
“It’s not just that Baseball Rebels homes in on the heroes (and reprobates) in the ongoing battles for civil rights and against gender discrimination. It’s that it does it with grace and humanity, telling must-read stories of barrier-breakers we know, like Satchel Paige, and others we ought to, like Frank Sykes.”—Larry Tye, author of Satchel: The Life and Times of an American Legend
“Baseball began in the cities, from a nostalgic longing for an agrarian paradise more ideal than real. That idealism—a wish for fairness and harmony on a level playing field—animated all that came after and is splendidly delineated in Robert Elias and Peter Dreier’s new book. Who is in, who is out, and who gets to decide: that has been the banner under which all baseball’s rebels have marched.”—John Thorn, official historian of Major League Baseball
“We all know about Ruth and Koufax. But as Dreier and Elias remind us, the game has also been played by Octavius Catto and Helen Callaghan, Frank Sykes and Glenn Burke—men and women who used the ballfields to fight for social justice and equality. Read this book, and you will agree that their stories deserve to be known.”—Joshua Prager, author of The Family Roe and The Echoing Green
“Baseball is a funny game. It’s also a serious game. In their book Baseball Rebels, Peter Dreier and Robert Elias take a deep look at the players and nonplayers who changed the game for the better by fighting for access and equality. From Jackie Robinson to Roberto Clemente to my own mother, a professional ballplayer herself, their individual stories as athletes add up to a revealing narrative of how the game reflected and impacted some of the most important cultural and social changes in the broader society. The book is a home run. In that I hit so few home runs in my major league career, I know one when I see one.”—Casey Candaele, Major League Baseball player with Montreal Expos, Houston Astros, and Cleveland Indians, and Triple-A manager
“Baseball endures not only because of the heroics of a Babe Ruth or a Shohei Ohtani but also because of its lesser-known heroes and heroines—those in the game who fought against its unjust status quo, be it unfair labor practices or the exclusion of people of color, women, and LGBTQs. Baseball Rebels digs deep into history to honor the stories of the men and women who, often at great sacrifice, fought to forge a better path for the national pastime.”—Jean Hastings Ardell, coauthor (with Ila Jane Borders) of Making My Pitch: A Woman’s Baseball Odyssey
“A rich, informative account of individuals associated with professional baseball—players, managers, umpires, executives, union organizers—who voiced dissenting, non-conformist views. As a game hidebound by tradition, proud of its conservatism, and draped in the American flag, these rebels brought various perspectives of social justice to a game that was often recalcitrant to reform and resistant to revolution. A necessary read for anyone interested in baseball for something more than stats and nostalgia.”—Gerald Early, author of A Level Playing Field: African American Athletes and the Republic of Sports

Bibliography
Index
Also by the Authors