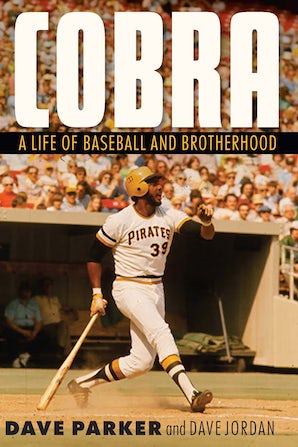 A Life of Baseball and Brotherhood

“For that period of time, he was the greatest player of my generation.”—Keith Hernandez

Dave Parker was one of the biggest and most badass baseball players of the late twentieth century. He stood at six foot five and weighed 235 pounds. He was a seven-time All-Star, a two-time batting champion, a frequent Gold Glove winner, the 1978 National League MVP, and a World Series champion with both the Pittsburgh Pirates and the Oakland A’s. Here the great Dave Parker delivers his wild and long-awaited autobiography—an authoritative account of Black baseball during its heyday as seen through the eyes of none other than the Cobra.

From his earliest professional days learning the game from such baseball legends as Pie Traynor and Roberto Clemente to his later years mentoring younger talents like Eric Davis and Barry Larkin, Cobra is the story of a Black athlete making his way through the game during a time of major social and cultural transformation. From the racially integrated playing fields of his high school days to the cookie-cutter cathedrals of his prime alongside all the midseason and late-night theatrics that accompany an athlete’s life on the road–Parker offers readers a glimpse of all that and everything in between. Everything.

Parker recounts the triumphant victories and the heart-breaking defeats, both on and off the field. He shares the lessons and experiences of reaching the absolute pinnacle of professional athletics, the celebrations with his sports siblings who also got a taste of the thrills, as well as his beloved baseball brothers whom the game left behind. Parker recalls the complicated politics of spring training, recounts the early stages of the free agency era, revisits the notorious 1985 drug trials, and pays tribute to the enduring power of relationships between players at the deepest and highest levels of the sport.

With comments at the start of each chapter by other baseball legends such as Pete Rose, Dave Winfield, Willie Randolph, and many more, Parker tells an epic tale of friendship, success, indulgence, and redemption, but most of all, family. Cobra is the unforgettable story of a million-dollar athlete just before baseball became a billion-dollar game.

​Dave Parker is a former National League Most Valuable Player and two-time batting champion. He played nineteen seasons in the Major Leagues, was a seven-time All-Star, and won three Gold Gloves and three Silver Slugger Awards. He was the 1979 All-Star MVP, played on two World Series champion teams, and was the first million-dollar-per-year player. Parker lives in Ohio, where he has created the Dave Parker 39 Foundation, an organization focused on finding a cure for Parkinson’s disease. Dave Jordan is a writer and filmmaker living in New Jersey. He founded Instream Sports, the first athlete-author writing platform. He has written for Sporting News, SB Nation, and the Hardball Times, and he is the coauthor (with John D’Acquisto) of Fastball John.

"Cobra is one of the most gripping and revealing baseball memoirs I've ever read. With vivid stories, richly textured characters and unvarnished insights on the good and the bad, Dave Parker and Dave Jordan take the reader on a captivating journey through one of the most compelling careers in baseball history."—Tyler Kepner, New York Times
“Dave Parker gets his due in Cobra. One of the greatest to ever play the game of baseball. We get to see what made the first Million Dollar Man. He is a giant among men, larger than life.”—Chuck D, founding member of Public Enemy
“Dave Parker played hard and he lived hard. Cobra brings us on a unique, fantastic journey back to that time of bold, brash, and styling ballplayers. He reveals in relentless detail who he really was and, in so doing, who we all really were.”—Dave Winfield
“Dave Parker’s autobiography takes us back to the time when ballplayers still smoked cigarettes, when stadiums were multiuse mammoth bowls, when AstroTurf wrecked knees with abandon, and when Blacks had their largest presence on the field in the game’s history. Honest, informative, funny, sad, even at times touching, Parker’s book fills a major void about what a great Black ballplayer’s life was like in the 1970s and 1980s. I highly recommend it.”—Gerald Early, professor of English and chair of the African and African American Studies Department at Washington University in St. Louis
“Dave Parker made a lasting mark on the imagination of an entire generation of baseball fans, standing out with his unforgettable combination of swagger, style, and skill. Cobra is a memoir that’s truly worthy of his legend, filled with Parker’s insightful, hilarious, and long-overdue perspectives on the game he played, the era he played it in, and the guys he played it with. I’ve been waiting forty years to read this book, and let me tell you—it was well worth the wait.”—Dan Epstein, author of Big Hair and Plastic Grass
“This is a book that transcends baseball. Dave Parker has finally told his story, and it resonates with the strength and soul that have always made him one of the most compelling, and complicated, figures in baseball history. Cobra is a triumph.”—Ricky Cobb (@Super70sSports)
“While reading Cobra you will see a portrait of a man with amazing talent, a huge heart, and the will to be great. You will also see a man who seems to have it all but is still searching for peace of mind and love. There are highlights and low moments, excess and loss, brilliance and poor decisions, brotherhood and disagreements, joy and pain.”—Preston Wilson, former MLB All-Star outfielder
“Impossibly charismatic, remarkably candid, and as cool as his nickname Cobra, Dave Parker is on the short list of the most compelling ballplayers of his generation. It’s fitting, then, that in his new and overdue memoir in collaboration with Dave Jordan, Parker tells his story in a way reminiscent of his pair of legendary throws in the 1979 All-Star Game: it’s mesmerizing, powerful, and right on the money.”—Chad Finn, sportswriter for the Boston Globe
"This is a highly readable and, more importantly, well contextualized work. It provides a chronological recounting of Parker's life, but it also presents insight into what was happening in and around a major league clubhouse during the 1970s and into the next decade."—Jorge Iber, NINE: A Journal of Baseball History and Culture
"Parker's voice is lively, and he has a keen eye for details that bring his teammates to life. Just below the surface of Parker's story is the racism he experienced as a Black baseball player. . . . A straightforward but no less engaging baseball autobiography from an underappreciated legend. A delight for baseball fans of all stripes."—Colin Chappell, Library Journal