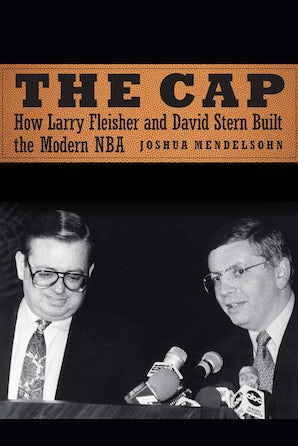 How Larry Fleisher and David Stern Built the Modern NBA

Today the salary cap is an NBA institution, something fans take for granted as part of the fabric of the league or an obstacle to their favorite team’s chances to win a championship. In the early 1980s, however, a salary cap was not only novel but nonexistent. The Cap tells the fascinating, behind-the-scenes story of the deal between the NBA and the National Basketball Players Association that created the salary cap in 1983, the first in all of sports, against the backdrop of a looming players’ strike on one side and threatened economic collapse on the other.

Joshua Mendelsohn illustrates how the salary cap was more than just professional basketball’s economic foundation—it was a grand bargain, a compromise meant to end the chaos that had gripped the sport since the early 1960s. The NBA had spent decades in a vulnerable position financially and legally, unique in professional sports. It entered the 1980s badly battered, something no one knew better than a few legendary NBA figures: Larry Fleisher, general counsel and negotiator for the National Basketball Players Association; Larry O’Brien, the commissioner; and David Stern, who led negotiations for the NBA and would be named the commissioner a few months after the salary cap deal was reached.

As a result, in 1983 the NBA and its players made a novel settlement. The players gave up infinite pay increases, but they gained a guaranteed piece of the league’s revenue and free agency to play where they wished—a combination that did not exist before in professional sports but as a result became standard for the NBA, NFL, and NHL as well.

The Cap explores in detail not only the high-stakes negotiations in the early 1980s but all the twists and turns through the decades that led the parties to reach a salary cap compromise. It is a compelling story that involves notable players, colorful owners, visionary league and union officials, and a sport trying to solidify a bright future despite a turbulent past and present. This is a story missing from the landscape of basketball history.

Joshua Mendelsohn is a veteran labor lawyer with extensive experience in sports and entertainment. He is currently the senior labor counsel for the Screen Actors Guild - American Federation of Television and Radio Artists and an adjunct professor at Benjamin N. Cardozo School of Law, teaching collective bargaining in sports and entertainment. Mendelsohn has negotiated agreements covering professional athletes and sports broadcasters with media companies and professional sports franchises. He lives in New York with his wife.

“Mendelsohn combines exhaustive research and a smooth narrative to tell the complex story of the salary cap, full of remarkable characters, unpredictable twists, and unforgettable anecdotes. . . . Basketball and sports fans interested in what goes on behind their favorite team’s closed doors will find this an important and accessible account of the NBA’s salary cap and how it has affected professional sports, for better or worse. A unique history.”—Library Journal
“To follow the NBA one must follow the money. To follow the money and to understand how and why players earn the staggering sums they do, intricate knowledge of the league’s labyrinthian salary cap is required. In The Cap Joshua Mendelsohn delivers a most comprehensive and well-written history and breakdown of the NBA’s economic bylaws and, in effect, a compelling evolutionary tale of the professional game, its principal characters, and the guiding fiscal policies behind its explosive global growth.”—Harvey Araton, author of When the Garden Was Eden
"A legal thriller, a close account of the tortuous 10-month negotiations, in the mid-1980s, for the big play that eventually put both the NBA's players and the owners in the win column."—David M. Shribman, Wall Street Journal
“Although focused on the drama and dynamics of the 1983 agreement with the players’ union . . . Mr. Mendelsohn manages to highlight a number of attributes that still distinguish the [NBA] league. . . . The ability of the NBA’s players and executives to take on an outsized role in the response to the killing of George Floyd reflects the rise of the league’s economic and social importance. Understanding how it has been able to secure so much cultural capital—and then use it so much more effectively than man other leagues—deserves attention as the sports industry looks to maintain its relevance in a post-pandemic world.”—New York Times

"Thanks to Joshua Mendelsohn’s new book The Cap, we now have a clearer picture of how exactly the financial framework of the modern NBA was built—and what that means today. It’s worth a read for historians and fans alike."—Daniel Reynolds, SB Nation
“In The Cap we get a blow-by-blow description of the maneuvering, threatening, striking, chaos, and even outright war that forged today’s relationship between the league and its players. Most important, we learn the stories of the people who made it happen, including Bob Cousy, David Stern, Oscar Robertson, Larry O’Brien, Bob Lanier, and Larry Fleisher—the first capologist. It’s a fascinating read for anyone interested in the history of the NBA and anyone interested in its Collective Bargaining Agreement.”—Larry Coon, NBA salary cap expert and writer for ESPN.com
“The salary cap is a fixture in today’s pro sports. The Cap chronicles the story of how Larry Fleisher and David Stern—two men locked in a bitter NBA labor dispute—forged a partnership that shaped the future of pro basketball and other sports leagues for years to come. This lively and authoritative account of that battle fought decades ago is a must-read for any true sports junkie interested in sports history. It is all true. I know. I was there.”—Jim Quinn, union lawyer for the NBPA, NFLPA, NHLPA, and MLBPA and author of Don’t Be Afraid to Win: How Free Agency Changed the Business of Pro Sports
"This is a book about the business side of sports that will one that every sports fan should read."—Guy Who Reviews Sports Books