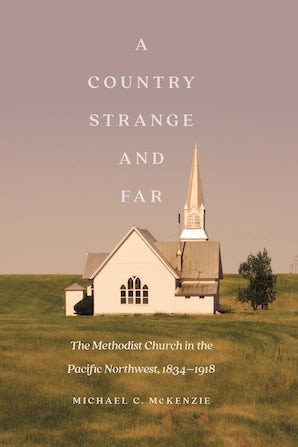 In 1834 the weary missionary Jason Lee arrived on the banks of the Willamette River and began to build a mission to convert the local Kalapuya and Chinook populations to the Methodist Church. The denomination had become a religious juggernaut in the United States, dominating the religious scene throughout the mid-Atlantic and East Coast. But despite its power and prestige and legions of clergy and congregants, Methodism fell short of its goals of religious supremacy in the northwest corner of the continent.

In A Country Strange and Far Michael C. McKenzie considers how and why the Methodist Church failed in the Pacific Northwest and how place can affect religious transplantation and growth. Methodists failed to convert local Native people in large numbers, and immigrants who moved into the rural areas and cities of the Northwest wanted little to do with Methodism. McKenzie analyzes these failures, arguing the region itself—both the natural geography of the place and the immigrants’ and clergy’s responses to it—was a primary reason for the church’s inability to develop a strong following there. The Methodists’ efforts in the Pacific Northwest provide an ideal case study for McKenzie’s timely region-based look at religion.

Michael C. McKenzie is an associate professor of philosophy and religion at Keuka College. He is the author of The Ethics of Paul Ramsey: The Triumph of Agape in a Postmodern World and Jehovah’s Witnesses: Understanding Their Faith and Teachings.

"This bioregional treatment is a significant addition to the literature on Methodism in the Northwest."—W. L. Pitts Jr., Choice
“In this artfully crafted book, McKenzie uses architecture as one indicator of the movement of the Methodist church from being a sect focused on discipline and saving souls to accommodating itself to the upwardly mobile status of its congregants, thus losing resonance with the common person. The focus on the Pacific Northwest makes this book an original contribution to our understanding of the importance of geography in understanding religious demographics.”—Donald E. Miller, author of Reinventing American Protestantism: Christianity in the New Millennium
“Employing a bioregional lens to do a close reading of Methodist history in the Pacific Northwest, McKenzie gives sinew and flesh to the claim that the region’s character has always been and remains an actor in the fates and fortunes of religion in this place. A Country Strange and Far is an insightful contribution to understanding the dynamics of regional religion and a refreshing approach to denominational history.”—Patricia O’Connell Killen, coeditor of Religion and Public Life in the Pacific Northwest: The None Zone?
“Michael McKenzie’s lively narrative of the Methodist efforts to establish a foothold in the Pacific Northwest brings fresh insight into the early religious landscape of the region. McKenzie’s story not only brings to life traditional Methodist figures but details the challenges presented by indifferent immigrants, Indigenous peoples, natural geography, and urbanity. This is a very welcome addition to the study of religion in the Pacific Northwest.”—Dale Soden, author of Outsiders in a Promised Land: Religious Activists in Pacific Northwest History
“McKenzie draws on a variety of sources to analyze the mindsets of evangelists, Native peoples, public officials, and settler families as they faced shattering hardships and disillusionments. Carefully researched and smoothly written, his study outlines a classic American drama: idealists struggling in vain to claim and subdue a new region.”—Albert Furtwangler, author of Bringing Indians to the Book
“A compelling, original new history, A Country Strange and Far reveals that efforts to establish the Methodist Church in the Pacific Northwest were confounded by the region itself. Through rich storytelling and nuanced analysis, Michael McKenzie sheds new light on the relationship between place and religion and significantly deepens our understanding of the roots of the Pacific Northwest’s distinct secularity.”—Tina Block, author of The Secular Northwest: Religion and Irreligion in Everyday Postwar Life

List of Illustrations
Prologue: Listening to Janus
Acknowledgments
Introduction: Death of the Old Gods
1. A Man Overwhelmed
2. Broken Is the Tie That Binds
3. Miracle in the Valley?
4. A Damned Hilly Place
5. The Peopled Cities
6. Dry and Scattered
7. As the Lion Lay Dying
Epilogue: Just a Few Bones
Notes
Bibliography
Index