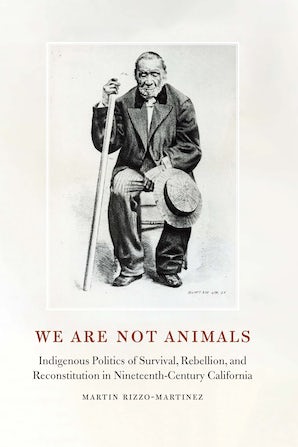 We Are Not Animals

Indigenous Politics of Survival, Rebellion, and Reconstitution in Nineteenth-Century California

By examining historical records and drawing on oral histories and the work of anthropologists, archaeologists, ecologists, and psychologists, We Are Not Animals sets out to answer questions regarding who the Indigenous people in the Santa Cruz region were and how they survived through the nineteenth century. Between 1770 and 1900 the linguistically and culturally diverse Ohlone and Yokuts tribes adapted to and expressed themselves politically and culturally through three distinct colonial encounters with Spain, Mexico, and the United States. In We Are Not Animals Martin Rizzo-Martinez traces tribal, familial, and kinship networks through the missions’ chancery registry records to reveal stories of individuals and families and shows how ethnic and tribal differences and politics shaped strategies of survival within the diverse population that came to live at Mission Santa Cruz.

We Are Not Animals illuminates the stories of Indigenous individuals and families to reveal how Indigenous politics informed each of their choices within a context of immense loss and violent disruption.

Martin Rizzo-Martinez is the California state park historian for the Santa Cruz District.

“Deeply researched and fresh in conception, methodology, and breadth, We Are Not Animals is a major contribution to the study of Native California and the missions. . . . In a singular and exceptional way among historians, Martin Rizzo-Martinez identifies Native people by name, family, and tribe and he follows the survivors of the Amah Mutsun nation through the American genocide of the late nineteenth century.”—Lisbeth Haas, professor of history at the University of California, Santa Cruz
“Rizzo-Martinez unearths Native voices from the archive to provide an overdue historical account of the Indigenous experience in Santa Cruz and surrounding region. By decentering colonial institutions like the missions and non-Native voices, Rizzo-Martinez effectively places Indigenous space and knowledge at the center of this study, a valuable model for future scholars of the Native experience in California.”—Yve Chavez (Tongva), assistant professor of history of art and visual culture at the University of California, Santa Cruz

“Both heartbreaking and inspiring, We Are Not Animals is a history of destruction as well as of California Indian survival against great odds. Rizzo-Martinez has written a deeply researched study of Indigenous peoples in Santa Cruz and surrounding areas that improves our understanding of Native American experiences in California as a whole.”—Benjamin Madley, author of An American Genocide: The United States and the California Indian Catastrophe, 1846–1873
“We Are Not Animals is an important book in California mission studies, deploying established sources and a significant, frequently overlooked one—Confirmation records—to reveal Indian community building inside the mission to which Franciscans were oblivious. Rizzo-Martinez effectively demonstrates how Indians exploited the mission system for their own ends and carries the story through early California statehood, challenging previous interpretations that missionization had extinguished Indian culture. We Are Not Animals marks the arrival of a sophisticated scholar to the conversations about early California history.”—James A. Sandos, Farquhar Professor of the American Southwest, Emeritus, University of Redlands

List of Illustrations
Acknowledgments
Foreword by Amah Mutsun Tribal Chair Valentin Lopez
Introduction
Chapter 1: “First were taken the children, and then the parents followed”
Chapter 2: “The diverse nations within the mission”
Chapter 3: “We are not animals”
Chapter 4: Captain Coleto and the Rise of the Yokuts
Chapter 5: “Not finding anything else to appropriate . . . ”
Chapter 6: Genocide and American fantasies of ancient Indians
Chapter 7: “They won’t try to kill you if they think you’re already dead”
Conclusion
Bibliography
Index