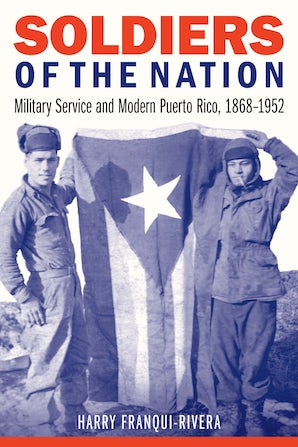 As the island of Puerto Rico transitioned from Spanish to U.S. imperial rule, the military and political mobilization of popular sectors of its society played important roles in the evolution of its national identities and subsequent political choices. While scholars of American imperialism have examined the political, economic, and cultural aspects of U.S. colonialism in Puerto Rico, few have considered the integral role of Puerto Rican men in colonial military service, helping to consolidate the empire.

In Soldiers of the Nation Harry Franqui-Rivera argues that the emergence of strong and complicated Puerto Rican national identities is deeply rooted in the long history of colonial military organizations on the island. Franqui-Rivera examines the patterns of inclusion and exclusion within the military and the various forms of citizenship that are subsequently transformed into socioeconomic and political enfranchisement. Analyzing the armed forces as an agent of cultural homogenization, Franqui-Rivera further explains the formation and evolution of Puerto Rican national identities that led to the creation of the Estado Libre Asociado (the commonwealth) in 1952. Franqui-Rivera concludes that Puerto Rican soldiers were neither cannon fodder for the metropolis nor the pawns of the criollo political elites. Rather, they were men with complex identities who demonstrated a liberal, popular, and broad definition of Puertorriqueñidad.

Harry Franqui-Rivera is an associate professor of history at Bloomfield College in New Jersey.

“One of this book’s greatest merits is that it eludes the identitarian Manicheism that has weakened much of Puerto Rican historiography since the U.S. invasion in 1898 and whose interpretive key is the confrontation between master and subject. Instead, the author travels through the quicksand—misunderstood or discarded by certain patriotic morals—of 'colonial collaborations,' contact zones between the inside of what is indigenous and the foreign yet indispensable outside of the empire.”—Silvia Álvarez Curbelo, Reviews in American History
"Soldiers of the Nation offers an important new history of Puerto Rico and its relationship with the United States."—Robert C. McGreevey, Journal of American History
"Soldiers of the Nation is a well-written, tightly argued work of social history that constitutes a valuable contribution. The book should be required reading not only for students of Puerto Rican and American military history, but also for scholars in related fields such as colonialism and decolonization, diplomatic history, and the interrelationship between the military and society. It is a worthy addition to the University of Nebraska’s Studies in War, Society, and the Military publications."—Prisco Hernández-Ríos, Journal of Military History
“Sheds light on the relationship between militarism and society and the attempt to culminate the political status of Puerto Rico after the approval of the Constitution of the Commonwealth.”—Carlos I. Hernández, Centro: Journal of the Center for Puerto Rican Studies
“A clear-eyed scholarly analysis of the complex entanglements binding Puerto Ricans and Latinas/os with militaries and militarism. . . . Both provocative and refreshing. . . . [This book offers us] a roadmap for understanding how we have arrived at this place of continued reliance on the military as a vehicle for social mobility and social standing that is increasingly hard to achieve. It is also an invitation to reflect on the limits and costs of this kind of inclusion.”—Gina Pérez, Latino Studies
"This study has much to recommend it. Franqui’s archival research is exemplary, as evidenced by the wealth of materials gleaned from rarely cited collections on the island and mainland. Above all, he is successful in demonstrating the extent to which military service shaped modern Puerto Rico. Soldiers of the Nation should be of interest to scholars of the island, and colonial military service more broadly."—Micah W. Wright, H-War
“Soldiers of the Nation offers new and refreshing perspectives on the relationship between Puerto Rico and the United States, presenting a strong case for military service as a pathway toward both establishing Puerto Rican civic identity and as part of a broader process of Americanizing the population. In the process, Harry Franqui-Rivera establishes a new standard for examining civil-military relations. . . . Soldiers of the Nation is the next stage in better understanding the American military as an agent of social transformation and its immediate and close relationship to the Puerto Rican people—an immediate classic.”—Bobby Wintermute, co-host of New Books in Military History and author of Public Health and the U.S. Military: A History of the Army Medical Department, 1818–1917
"Franqui-Rivera . . . has written the most useful military history of Puerto Rico in English, while discussing the importance of military service to the evolution of a Puerto Rican national identity. . . . A good read for anyone interested in the history of modern Puerto Rico, American colonial policy, or national military policy."—A. A. Nofi, Strategy Page
“Soldiers of the Nation is the first book to make a coherent case for the significance of military bodies in the formation of Puerto Rico’s colonial history. The book’s real contribution is to show how, with every war and military mobilization, the United States and Puerto Rico wove a complex web of connections, agreements, and participatory hierarchies. Franqui-Rivera helps us understand how the class contradictions that Puerto Rican men in the military brought to anticolonial politics helped seal Puerto Rico’s fate in the mid-twentieth century.”—Aldo Lauria-Santiago, professor of history at Rutgers University and author of To Rise in Darkness: Revolution, Repression, and Memory in El Salvador

“A game-changer. This book adds to our understanding of the relationship between colonial citizens and the empire that rules them, while bringing to the forefront the efforts of Puerto Ricans to define what the impact of colonialism would be in their daily lives.”—Teresita Levy, associate professor of Latin American and Puerto Rican studies at Lehman College and author of Puerto Ricans in the Empire: Tobacco Growers and U.S. Colonialism

List of Illustrations
Acknowledgments
Introduction
1. Birth of a Nation: A Labor of Thirty Years, 1868–1898
2. Puerto Rican a la Americana: A Hearts and Minds Campaign, 1898–1914
3. A New Day Has Dawned: World War I and Mobilization of the Peasant
4. War against the Yankees! Prelude to the Battle over Modern Puerto Rico
5. Education, Industrialization, and Decolonization: The Battlefields of World War II
6. Fighting for the “Nation”? War at Home and Abroad
Conclusion
Notes
Bibliography
Index