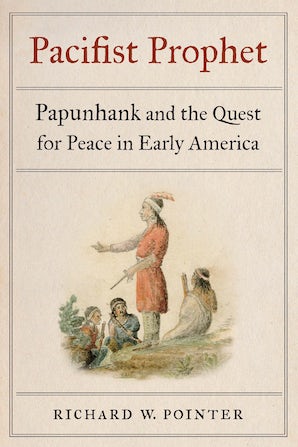 Papunhank and the Quest for Peace in Early America

Pacifist Prophet recounts the untold history of peaceable Native Americans in the eighteenth century, as explored through the world of Papunhank (ca. 1705–75), a Munsee and Moravian prophet, preacher, reformer, and diplomat. Papunhank’s life was dominated by a search for a peaceful homeland in Pennsylvania and the Ohio country amid the upheavals of the era between the Seven Years’ War and the American Revolution.

His efforts paralleled other Indian quests for autonomy but with a crucial twist: he was a pacifist committed to using only nonviolent means. Such an approach countered the messages of other Native prophets and ran against the tide in an early American world increasingly wrecked with violence, racial hatred, and political turmoil. Nevertheless, Papunhank was not alone. He followed and contributed to a longer and wider indigenous peace tradition.

Richard W. Pointer shows how Papunhank pushed beyond the pragmatic pacifism of other Indians and developed from indigenous and Christian influences a principled pacifism that became the driving force of his life and leadership. Hundreds of Native people embraced his call to be “a great Lover of Peace” in their quests for home. Against formidable odds, Papunhank’s prophetic message spoke boldly to Euro-American and Native centers of power and kept many Indians alive during a time when their very survival was constantly threatened. Papunhank’s story sheds critical new light on the responses of some Munsees, Delawares, Mahicans, Nanticokes, and Conoys for whom the “way of war” was no way at all.

Richard W. Pointer is a professor of history at Westmont College. He is the author of Encounters of the Spirit: Native Americans and European Colonial Religion and Protestant Pluralism and the New York Experience: A Study of Eighteenth-Century Religious Diversity.

"This intriguing biography of the Munsee leader Papunhank (1705–75) adds another rich layer to recent scholarship on the complex world between the Delaware and Ohio Rivers in the middle of the eighteenth century. . . . A very useful work for college and graduate courses."—D. R. Mandell, Choice
“Pacifist Prophet ushers onto the American stage a forgotten Native leader who went not on the warpath but on the peace path. The book has much to teach us about early America—and perhaps, too, about our own turbulent times.”—James H. Merrell, author of Into the American Woods: Negotiators on the Pennsylvania Frontier
“With engaging prose, scrupulous research, and great sensitivity, Pointer treats the life of a single Native American man seeking peace, stability, family, and place in a world of migration, famine, pestilence, and war.”—Gregory Evans Dowd, author of A Spirited Resistance: The North American Indian Struggle for Unity, 1745–1815
“In Pacifist Prophet Richard Pointer weaves a compelling biography of the little-known Munsee and Moravian leader Papunhank, who traversed the varied religious, political, and geographic terrain from Philadelphia to the Ohio Valley in the turbulent middle decades of the eighteenth century.”—Rachel M. Wheeler, author of To Live upon Hope: Mohicans and Missionaries in the Eighteenth-Century Northeast