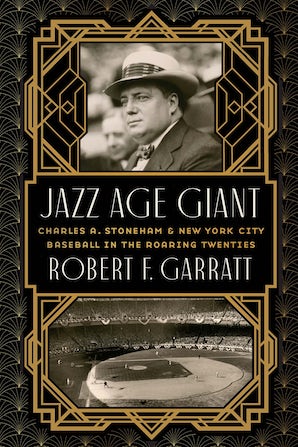 Charles A. Stoneham and New York City Baseball in the Roaring Twenties

In the early 1920s, when the New York Yankees’ first dynasty was taking shape, they were outplayed by their local rival, the New York Giants. Led by manager John McGraw the Giants won four consecutive National League pennants and two World Series, both against the rival Yankees. Remarkably, the Giants succeeded despite a dysfunctional and unmanageable front office. And at the center of the turmoil was one of baseball’s more improbable figures: club president Charles A. Stoneham, who had purchased the Giants for $1 million in 1919, the largest amount ever paid for an American sports team.

Short, stout, and jowly, Charlie Stoneham embodied a Jazz Age stereotype—a business and sporting man by day, he led another life by night. He threw lavish parties, lived extravagantly, and was often chronicled in the city tabloids. Little is known about how he came to be one of the most successful investment brokers in what were known as “bucket shops,” a highly speculative and controversial branch of Wall Street. One thing about Stoneham is clear, however: at the close of World War I he was a wealthy man, with a net worth of more than $10 million. This wealth made it possible for him to purchase majority control of the Giants, one of the most successful franchises in Major League Baseball. Stoneham, an owner of racehorses, a friend to local politicians and Tammany Hall, a socialite and a man well placed in New York business and political circles, was also implicated in a number of business scandals and criminal activities. The Giants’ principal owner had to contend with federal indictments, civil lawsuits, hostile fellow magnates, and troubles with booze, gambling, and women. But during his sixteen-year tenure as club president, the Giants achieved more success than the club had seen under any prior regime.

In Jazz Age Giant Robert Garratt brings to life Stoneham’s defining years leading the Giants in the Roaring Twenties. With its layers of mystery and notoriety, Stoneham’s life epitomizes the high life and the changing mores of American culture during the 1920s, and the importance of sport, especially baseball, during the pivotal decade.

Robert F. Garratt is an emeritus professor of English and humanities at the University of Puget Sound. He is the author of Home Team: The Turbulent History of the San Francisco Giants (Nebraska, 2017).

“A wonderful, interesting, and informative book, even if you are not a baseball fan. By placing Charles Stoneham within [the context of] New York’s Jazz Age, Robert Garratt offers a unique perspective on the history of Giants baseball ownership.”—Bob Lurie, San Francisco Giants owner, 1976–1993
“Like the fictional Jay Gatsby, Charles Stoneham was a poor boy who became wealthy through marginally legal business practices and often associations with shady characters. As president of John McGraw’s perennially powerful and prosperous New York Giants, Stoneham was a major figure in Major League Baseball until his death in 1936. He is part of a colorful era in baseball and the city of New York, and Garratt does him justice in a well-done biography.”—Charles C. Alexander, author of John McGraw and Rogers Hornsby: A Biography

“A well-researched, informative biography. . . . Much of [Charles Stoneham’s] private life was a mystery, and Robert Garratt reveals the reasons why, which I suspect will come as a surprise to even the most knowledgeable of baseball fans. You won’t find a more entertaining look at baseball as it played out beyond the field during the 1920s and the early years of the Depression.”—Lyle Spatz, coauthor of 1921: The Yankees, the Giants and the Battle for Baseball Supremacy in New York
“Robert F. Garratt’s expertly researched and lively biography of Stoneham, successful businessman and owner of the New York Giants baseball team in the 1920s and 1930s, makes for highly entertaining and informative reading. Garratt’s intriguing positioning of Stoneham’s fascinating life story . . . in juxtaposition with F. Scott Fitzgerald’s Jay Gatsby suggests that it can be read as emblematic of the Jazz Age in which he flourished and adds texture to this account of this famously private figure whose story has hitherto remained unexamined.”—Jackson R. Bryer, president of the F. Scott Fitzgerald Society

3. The House of Lords

4. A Fresh Scent of Scandal

6. The Battle for New York