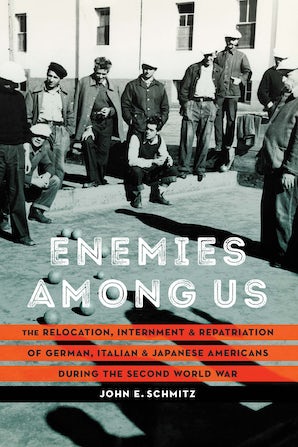 The Relocation, Internment, and Repatriation of German, Italian, and Japanese Americans during the Second World War

Recent decades have drawn more attention to the United States’ treatment of Japanese Americans during World War II. Few people realize, however, the extent of the country’s relocation, internment, and repatriation of German and Italian Americans, who were interned in greater numbers than Japanese Americans. The United States also assisted other countries, especially in Latin America, in expelling “dangerous” aliens, primarily Germans.

In Enemies among Us John E. Schmitz examines the causes, conditions, and consequences of America’s selective relocation and internment of its own citizens and enemy aliens, as well as the effects of internment on those who experienced it. Looking at German, Italian, and Japanese Americans, Schmitz analyzes the similarities in the U.S. government’s procedures for those they perceived to be domestic and hemispheric threats, revealing the consistencies in the government’s treatment of these groups, regardless of race.

Reframing wartime relocation and internment through a broader chronological perspective and considering policies in the wider Western Hemisphere, Enemies among Us provides new conclusions as to why the United States relocated, interned, and repatriated both aliens and citizens considered enemies.

John E. Schmitz is a professor of history at Northern Virginia Community College–Annandale.

"Highly recommended to anyone interested in the history of US experience with civilian internees."—Jean-Michel Turcotte, H-War
"The breadth of Enemies among Us makes it well suited for inclusion in undergrad and graduate school courses in history, American studies, war studies, and international relations."—Alan Rosenfeld, Michigan War Studies Review
"Enemies among Us will be an indispensable resource for those seeking to comprehend how, during World War II, it came to be that 'Americans created, castigated, and then incarcerated alleged enemies; all this, despite lack of evidence, or worse, evidence to the contrary.'"—William Issel, California History
"Schmitz's account does much to offer the well-demonstrated and lucid ground to demand that repeating this history would be a tragedy that leaves no one unscathed."—Tyler Correia, H-Socialisms
"Schmitz's work untangles the psychological, political, social, and, yes, racial forces that culminated in a sad historical episode."—Mark G. Brennan, Chronicles Magazine
“Enemies among Us sheds important light on little-remembered but undeniably significant episodes in twentieth century history. By expanding our understanding of American detention, internment, and repatriation during World War II, John Schmitz exposes the dynamics that can lead to the mass violation of civil rights, even by otherwise well-intentioned policy makers and law enforcement officials. As much as it is a historical text, this work also presents an important warning for our world today.”—Bradley W. Hart, author of Hitler’s American Friends: The Third Reich’s Supporters in the United States
“John Schmitz has accomplished something no other scholar has attempted: a comprehensive, thoroughly researched investigation of the wartime treatment of all three major national groups treated as ‘enemy aliens’ in the United States during World War II: Germans, Italians, and Japanese. The interpretive arguments are provocative [and] important.”—Max Paul Friedman, author of Rethinking Anti-Americanism: The History of an Exceptional Concept in American Foreign Relations
“John Schmitz makes astute use of previously unused documents to weave together the internment and relocation story, the military situation abroad, and the machinations of American politicians struggling to master it all. Enemies among Us is a unique and important addition to our understanding of this sad episode.”—Stephen Fox, author of Fear Itself: Inside the FBI Roundup of German Americans during World War II