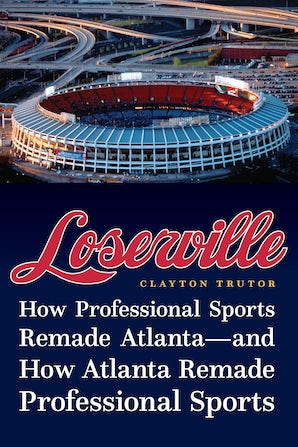 In July 1975 the editors of the Atlanta Constitution ran a two-part series entitled “Loserville, U.S.A.” The provocatively titled series detailed the futility of Atlanta’s four professional sports teams in the decade following the 1966 arrival of its first two major league franchises, Major League Baseball’s Atlanta Braves and the National Football League’s Atlanta Falcons. Two years later, the Atlanta Hawks of the National Basketball Association became the city’s third major professional sports franchise. In 1972 the National Hockey League granted the Flames expansion franchise to the city, making Atlanta the first southern city with teams in all four of the big leagues.

The excitement surrounding the arrival of four professional franchises in Atlanta in a six-year period soon gave way to widespread frustration and, eventually, widespread apathy toward its home teams. All four of Atlanta’s franchises struggled in the standings and struggled to draw fans to their games. Atlantans’ indifference to their new teams took place amid the social and political fracturing that had resulted from a new Black majority in Atlanta and a predominately white suburban exodus. Sports could never quite bridge the divergence between the two.

Loserville examines the pursuit, arrival, and response to professional sports in Atlanta during its first decade as a major league city (1966–75). It scrutinizes the origins of what remains the primary model for acquiring professional sports franchises: offers of municipal financing for new stadiums. Other Sunbelt cities like San Diego, Phoenix, and Tampa that aspired to big league stature adopted Atlanta’s approach. Like the teams in Atlanta, the franchises in these cities have had mixed results—both in terms of on-field success and financial stability.

Clayton Trutor holds a PhD in U.S. history from Boston College and teaches at Norwich University in Northfield, Vermont. He writes about college football and basketball for SB Nation. Trutor is also the Vermont state chairman of the Society for American Baseball Research (SABR) and is a regular contributor to the SABR Biography Project.

“Clayton Trutor vividly and expertly untangles the complex ball of issues that made Atlanta's transformation into a ‘Major League’ sports town so unexpectedly (and maddeningly) difficult. A fascinating look at the way professional sports collided with politics, economics, and social upheaval in the 1960s and 1970s, Loserville also serves as a cautionary tale for any twenty-first-century city that’s hoping to land its own MLB, NFL, NBA, or NHL franchise. In other words, be careful what you wish for!”—Dan Epstein, author of Big Hair and Plastic Grass: A Funky Ride Through Baseball and America in the Swinging ’70s
“In Loserville Clayton Trutor uses painstaking research and impressive command of Atlanta’s political and racial history to depict the birth of a modern American sports town. Only this creation story comes with a surprising twist. Build it and they will come? Think again.”—John Eisenberg, author of The League: How Five Rivals Created the NFL and Launched a Sports Empire
“As a baseball historian and writer since 1969, and as a fan of the Braves since 1957, I loved every page of Loserville, a well-crafted and well-researched history of both Atlanta and its sports teams. I especially enjoyed reliving the roller-coaster ride the baseball team took from its arrival in 1966 through its dismal years as the Bad News Braves, with attendance so poor that it took Ted Turner to keep the team in town—and eventually in national view via TBS and some shrewd acquisitions. I like the place and the book.”—Dan Schlossberg, author of When the Braves Ruled the Diamond: Fourteen Flags Over Atlanta
“Loserville is a fascinating history of Atlanta’s emergence as the epicenter of Sunbelt sports. . . . In a revealing portrait of Atlanta and the ground-shifting changes in American sports, Trutor demonstrates how the age of franchise free agency collided with the political fracturing of a divided city. Anyone interested in the history of American sports, the South, or Atlanta should read this book.”—Johnny Smith, Julius C. “Bud” Shaw Professor of Sports History at the Georgia Institute of Technology and author of The Sons of Westwood: John Wooden, UCLA, and the Dynasty that Changed College Basketball
“There is no other word than masterful to describe Clayton Trutor’s Loserville, the exhaustively researched and beautifully written story of the big-league burning of Atlanta. He tells the cautionary tale of well-meaning town fathers, eager to show off a Southern city ‘too busy to hate,’ determined at all costs to bring their city top-level professional sports franchises. But they sadly didn’t quite get what they bargained for. Along the way, they lost their charm, their innocence, and a whole lot of money as they rolled out the red carpet for four franchises that took them into the future but never quite measured up.”—Jack Gilden, author of Collision of Wills: Johnny Unitas, Don Shula, and the Rise of the Modern NFL
"A brilliant look at the intricate ways sports and politics are intertwined."—Publishers Weekly, starred review
"Every Atlanta sports fan should read this book."—David Schiele, WBIR-TV Knoxville
"If one enjoys reading about the business side of sports mixed in with social issues, this is an excellent choice."—Lance Smith, Guy Who Reviews Sports Books
"Loserville is a well-researched and important contribution to sports history and the history of the Sun Belt."—Seth S. Tannenbaum, Journal of Southern History
"Loserville is a must read. It captures the amazing and hopeful dance between cities and the sports franchises that plant roots in them."—John Canzano, The Oregonian and 750 AM The Game (Portland, Oregon)