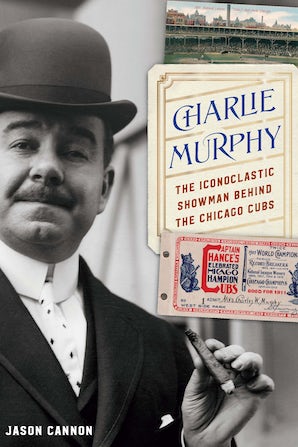 The Iconoclastic Showman behind the Chicago Cubs

Finalist for the 2022 CASEY Award

You don’t know the history of the Chicago Cubs until you know the story of Charles Webb Murphy, the ebullient and mercurial owner of this historic franchise from 1905 through 1914. Originally a sportswriter in Cincinnati, he joined the New York Giants front office as a press agent—the game’s first—in 1905. That season, hearing the Cubs were for sale, he secured a loan from Charles Taft, the older half-brother of the future president of the United States, to buy a majority share and become the team’s new owner. In his second full season, the Cubs won their first World Series. They won again in 1908, but soon thereafter Murphy’s unconventional style invited ill will from the owners, his own players, and the press, even while leading the team through their most successful period in team history.

In Charlie Murphy: The Iconoclastic Showman behind the Chicago Cubs, Jason Cannon explores Murphy’s life both on and off the field, painting a picture of his meteoric rise and precipitous downfall. Readers will get to know the real Murphy, not the simplified caricature created by his contemporaries that has too frequently been perpetuated through the years, but the whirling dervish who sent the sport of baseball spinning and elevated Chicago to the center of the baseball universe.

Cannon recounts Murphy’s rise from the son of Irish immigrants to sports reporter to Cubs president, charting his legacy as one of the most important but overlooked figures in the National League’s long history. Cannon explores how Murphy’s difficult teenage years shaped his love for baseball; his relationship with the Tafts, one of America’s early twentieth-century dynastic families; his successful and tumultuous years as a National League executive; his last years as an owner before the National League Board of Directors ousted him in 1914; and, finally, Murphy’s attempt to rewrite his legacy through the construction of the Murphy Theater in his hometown of Wilmington, Ohio.

Jason Cannon worked in collegiate sports information before turning to teaching and writing. His articles have appeared in NINE: A Journal of Baseball History and Culture.

"This is a remarkable book full of baseball information for all fans to enjoy. The book is easy to read and should be on the bookshelf of every baseball fan, baseball historian and especially those with Chicago Cubs fandom."—Tom Knuppel, Knup Sports
"As for the complete story of Murphy, from his beginnings to his ownership of the Cubs and the fractured relationships at the time of his ouster, Cannon does a very good job of bringing him to life to the reader and illustrating an accurate picture of the business side of the game at that time."—Lance Smith, Guy Who Reviews Sports Books
“Over the first couple of decades of the twentieth century, Cubs owner and general manager Charles Murphy was as significant as any executive in baseball and one of its most interesting characters. Jason Cannon perceptively unwraps the man who oversaw Cubs championship seasons and was a principal actor in some of the era’s most notable controversies and boardroom battles.”—Daniel R. Levitt, coauthor of In Pursuit of Pennants: Baseball Operations from Deadball to “Moneyball”
“Impeccably researched and masterfully written, Charlie Murphy tells the story of one of baseball’s most well-known, forgotten owners. Only after you’ve read it do you realize how much you didn’t know of Murphy and his impact on the game.”—Willie Steele, editor of NINE: A Journal of Baseball History and Culture
“Part exuberant showman and part irreverent iconoclast, Charles W. Murphy eventually aroused the ire of players, fans, and even the baseball establishment with his controversial decisions, which eventually led to his undoing. Jason Cannon deftly uses hundreds of articles, documents, interviews, and other original sources to look past Murphy’s reputation as an egotistical blowhard and reassess both his personal life and professional career. In so doing, the author reveals a detailed narrative of the Progressive Era and a compelling, richly nuanced portrait of one of baseball’s most colorful characters.”—Jack Bales, author of Before They Were the Cubs

Finalist for the 2022 CASEY Award