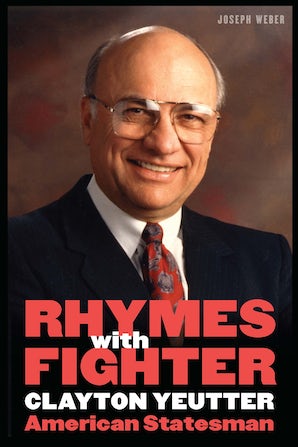 From a hardscrabble childhood in the Great Depression on the dusty plains of rural Nebraska, Clayton Yeutter (1930–2017) rose to work for four U.S. presidents, serving in the cabinets of two of them. His challenge, posed by one of President Ronald Reagan’s aides, was this: go and change the world. As U.S. trade representative he did just that, opening the global trading arena with bold efforts that led to NAFTA, the creation of the World Trade Organization, and extraordinary growth in cross-border business. Today’s global trading regime began with Yeutter.

A distinguished lawyer with a doctorate in economics, Yeutter also had deep business experience leading the giant futures trading organization the Chicago Mercantile Exchange, now called the CME Group. But he never forgot his family’s farm roots, and those roots led him to another top job as President George H. W. Bush’s secretary of agriculture.

Yeutter’s intellectual firepower, paired with an engaging personality and a midwesterner’s beaming smile, made friends and found common ground with leaders and trade officials worldwide. Although a loyal GOP leader who served as counselor to a president and head of the Republican National Committee, Yeutter was a moderate who had admirers on both sides of the aisle.

This is his life story.

Joseph Weber is the Jerry and Karla Huse Professor of News-Editorial in the College of Journalism and Mass Communications at the University of Nebraska–Lincoln. He spent twenty-two years reporting and writing for Businessweek, becoming chief of correspondents. Weber is the author of Divided Loyalties: Young Somali Americans and the Lure of Extremism and Transcendental Meditation in America: How a New Age Movement Remade a Small Town in Iowa.

“Clayton Yeutter used to tell reporters his name rhymed with ‘fighter.’ Joseph Weber captures the negotiating chops and Nebraska-sized personality of the poor farm boy who became President Reagan’s trade-warrior-in-chief and President George H. W. Bush’s secretary of agriculture.”—Peter Coy, economics editor, Bloomberg Businessweek
“Clayton Yeutter was a pragmatic political entrepreneur who, as Republican National Committee chairman, managed the delicate balance between the growing factions within a party in desperate need of leadership and rebuilding.”—Michael S. Steele, former Republican National Committee chairman and former lieutenant governor of Maryland
“Clayton Yeutter played an indispensable role in American history when he helped negotiate the 1988 Canada–United States Free Trade Agreement. What followed was the more expansive 1994 North American Free Trade Agreement and a toppling of dominoes around the world as nation after nation reduced trade barriers. Joseph Weber’s biography of Yeutter is a thoughtful examination of a statesman at the forefront of this and other debates critical to U.S. politics and policy.”—James A. Baker III, former U.S. secretary of the treasury
“Joseph Weber has captured the essence of an endangered species—the principled Republican moderate. Clayton Yeutter believed that progress requires engagement and compromise, and he used his keen intellect and Nebraska know-how to bring our world closer together. This perceptive biography reminds us of the days when ‘globalization’ wasn’t a dirty word and when ‘international trade’ was considered an economic building block.”—Richard S. Dunham, co-director of the Global Business Journalism program at Tsinghua University, Beijing, and former president of the National Press Club
“Joseph Weber’s detailed biography of Clayton Yeutter brilliantly captures the outstanding character, warm personality, and enormous talent of a man who has so richly contributed to our nation and its values. It is particularly timely in today’s contentious political climate and is a must-read for aspiring future leaders.”—Carla A. Hills, former U.S. secretary of housing and urban development and U.S. trade representative
“Clayton Yeutter was a man of remarkable talent. Clayton’s biography by Joseph Weber tells the story of a young man who grew up on a farm in Nebraska and never forgot his roots. It was Clayton who leveled the playing field for American farmers and ranchers so they could sell their products worldwide. As the book so convincingly shows, Clayton was always willing to take risks and break some china to make the world a better place. Thanks to Joseph Weber for telling the story of an honorable man who used his life to accomplish great things.”—Michael O. Johanns, former U.S. secretary of agriculture, Nebraska governor, and U.S. senator