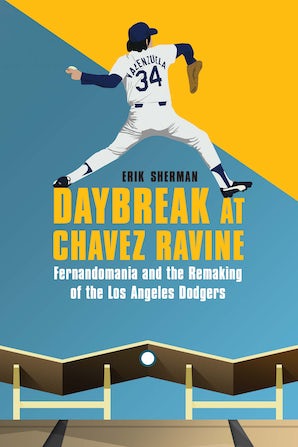 Fernandomania and the Remaking of the Los Angeles Dodgers

Fernando Valenzuela was only twenty years old when Tom Lasorda chose him as the Dodgers’ opening-day starting pitcher in 1981. Born in the remote Mexican town of Etchohuaquila, the left-hander had moved to the United States less than two years before. He became an instant icon, and his superlative rookie season produced Cy Young and Rookie of the Year awards—and a World Series victory over the Yankees.

Forty years later, there hasn’t been a player since who created as many Dodgers fans. After the Dodgers’ move to Los Angeles from Brooklyn in the late 1950s, relations were badly strained between the organization and the Latin world. Mexican Americans had been evicted from their homes in Chavez Ravine, Los Angeles—some forcibly—for well below market value so the city could sell the land to team owner Walter O’Malley for a new stadium. For a generation of working-class Mexican Americans, the Dodgers became a source of great anguish over the next two decades.

However, that bitterness toward the Dodgers vanished during the 1981 season when Valenzuela attracted the fan base the Dodgers had tried in vain to reach for years. El Toro, as he was called, captured the imagination of the baseball world. A hero in Mexico, a legend in Los Angeles, and a phenomenon throughout the United States, Valenzuela did more to change that tense political environment than anyone in the history of baseball. A new fan base flooded Dodger Stadium and ballparks around the United States whenever Valenzuela pitched in a phenomenon that quickly became known as Fernandomania, which continued throughout a Dodger career that included six straight All-Star game appearances.

Daybreak at Chavez Ravine retells Valenzuela’s arrival and permanent influence on Dodgers history while bringing redemption to the organization’s controversial beginnings in LA. Through new interviews with players, coaches, broadcasters, and media, Erik Sherman reveals a new side of this intensely private man and brings fresh insight to the ways he transformed the Dodgers and started a phenomenon that radically altered the country’s cultural and sporting landscape.

Erik Sherman is a baseball historian and the New York Times best-selling author of Kings of Queens: Life beyond Baseball with the ’86 Mets and Two Sides of Glory: The 1986 Boston Red Sox in Their Own Words (Nebraska, 2021). He is the coauthor of five other highly acclaimed baseball-themed books. Sherman is a 2023 inductee to the New York State Baseball Hall of Fame for his baseball writing and hosts the Erik Sherman Show podcast. Visit ErikShermanBaseball.com.

“Finally, Fernando Valenzuela has the nuanced and textured biography he richly deserves, as Erik Sherman expertly traces the history of the region, the team, and the man billed as the ‘Mexican Sandy Koufax,’ who delivered on that promise and inspired a generation.”—Tyler Kepner, national baseball writer for the New York Times and author of The Grandest Stage: A History of the World Series
“A beautiful and long-necessary ode to one of the most important and influential pitchers in Major League history. Sherman’s affection for the subject, combined with his trademark dogged reporting, makes Daybreak at Chavez Ravine a pure Fernandomania delight.”—Jeff Pearlman, New York Times best-selling author of The Last Folk Hero: The Life and Myth of Bo Jackson
“Of all the tremors and earthquakes in Southern California in the last hundred years, the seismic shift in culture and dynamics in Chavez Ravine was caused by the explosion in popularity of one man—Fernando!”—Steve Garvey, longtime Dodgers first baseman and ten-time All-Star
“Fernandomania! Graybeards will recall the fervor of 1981, when a chubby rookie with a screwball from Sonora rolled his eyes skyward and threw blanks. All these years later, Fernando Valenzuela remains mysterious by design, but Erik Sherman has unlocked his story, and it is a great one.”—John Thorn, official historian for Major League Baseball
“Fernando Valenzuela changed baseball, the Dodgers, and the city of Los Angeles—all for the better. His incredible story, smartly told here by Erik Sherman, captures the imagination and reminds us of baseball’s unique ability to alter American culture. One of the game’s great heroes comes to life in this wonderful tale.”—Jonathan Eig, New York Times best-selling author of Luckiest Man and Opening Day

“We may never know whether that seemingly unflappable rookie pitcher from Mexico was ever nervous in 1981 as he forever changed the Dodgers and the baseball world. But author Erik Sherman is the perfect guide, chronicling the everlasting excitement and emotion as he takes fans on a retro tour and appreciation of Fernandomania and beyond.”—Mark Langill, Dodgers team historian
“What Fernando meant for all cultures was that nothing’s impossible. To this day, I see people’s jaws drop when they come face-to-face or even get a glimpse of him.”—Rick Monday, former Dodger All-Star center fielder and longtime team radio broadcaster

1. A Reluctant Hero
2. David versus Goliath
3. LA Goes Dodger Blue
4. The Mexican Experience North of the Border
5. Uncut Diamond
6. Prelude to Greatness
7. The Fable That Came to Life
8. A Star Is Born
9. The Kiss That Sparked a Movement
10. Fernandomania!
11. An International Frenzy
12. Manias
13. Mr. Valenzuela Goes to Washington
14. Struck Out
15. A Star-Spangled Return
16. The Lasorda Effect
17. Houston Has a Problem
18. Blue Monday
19. Speaking "Catcherese"
20. Comeback Kids
21. The Legend Grows
22. Missing the Party
23. Leaving LA in Style
24. The Long Road Back to Glory
25. Legacy