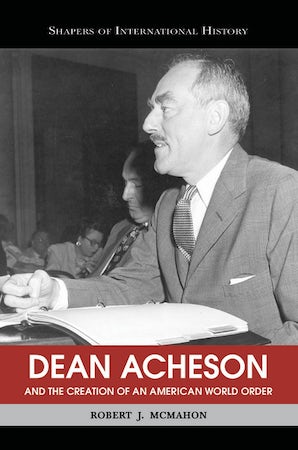 Dean Acheson and the Creation of an American World Order

This compact and accessible biography critically assesses the life and career of Dean Acheson, one of America’s foremost diplomats and strategists. As a top State Department official from 1941 to 1947 and as Harry S. Truman’s secretary of state from 1949 to 1953, Acheson shaped many of the key U.S. foreign policy initiatives of those years, including the Truman Doctrine, the Marshall Plan, the creation of the North Atlantic Treaty Organization, the rebuilding of Germany and Japan, America’s intervention in Korea, and its early involvement in the Middle East and Southeast Asia. Right up until his death in 1971, Acheson continued to participate in major policy decisions and debates, including the Cuban missile and Berlin crises and the Vietnam War.

Dean Acheson can justifiably be called the principal architect of the American Century. More than any other individual, Acheson is responsible for designing and implementing the ultimately successful U.S. Cold War strategy for containing the Soviet Union. In an even broader sense, Acheson played an instrumental role in creating the institutions, alliances, and economic arrangements that, in the 1940s, brought to life an American-dominated world order. The remarkable durability of that world order—which has remained the dominant fact of international life long after the end of the Cold War—makes a careful examination of Acheson’s diplomacy especially relevant to today’s international challenges.

Robert J. McMahon is the Mershon Distinguished Professor of History at Ohio State University. He is the author of several books on U.S. foreign relations, including The Cold War: A Very Short Introduction, The Limits of Empire: The United States and Southeast Asia Since World War II, and The Cold War on the Periphery: The United States, India, and Pakistan. He served as the president of the Society for Historians of American Foreign Relations in 2001. He lives in Columbus, Ohio.

“McMahon’s book is both an insightful biography of Dean Acheson and a compelling account of American foreign policy during World War II and the Cold War. In his focus on what Acheson called the international ‘political economy of freedom,’ McMahon provides one of the most succinct and provocative accounts of how diplomacy, military power, and economics intersected in the making of the American Century. McMahon reminds readers of the enduring power of a voice like Acheson’s and of the sophistication required for effective foreign policymaking. Anyone interested in international affairs would profit from reading this excellent book.”—Jeremi Suri, professor, University of Wisconsin-Madison, and author of Henry Kissinger and the American Century
“Robert McMahon’s Dean Acheson and the Creation of an American World Order is a true triumph of both historical scholarship and literary craftsmanship. In elegant and concise style, McMahon succeeds throughout this book in connecting Acheson’s life and career with the international role of America that Acheson sought to shape and promote. Dean Acheson was the most significant secretary of state in our history, and McMahon has captured his strengths and weaknesses in this remarkable book.”—Thomas Alan Schwartz, professor of history, Vanderbilt University
“In this fluent, authoritative, and concise biography, Robert J. McMahon brings to life one of the giant figures in American diplomatic history, a man whose historical importance is matched by his fascinating persona. An absorbing examination of Acheson and his policy decisions, and of the broader contours of U.S. foreign policy at the dawn of the Cold War.”—Fredrik Logevall, professor of history, Cornell University
"Takes you into the inner workings of America’s national policy making from 1941 until [Acheson’s] death in 1972. . . . Those wanting to discover the intricacies of America’s national security policy making will find this compact biography of Acheson’s an excellent read.”—Foreign Area Officer Journal
“Expertly crafted, lucidly written, and thoroughly readable. Highly recommended.”—Choice
“McMahon’s Dean Acheson and the Creation of an American World Order authoritatively captures the strengths and weaknesses of the greatest Secretary of State since World War II as well as the interplay of economics, diplomacy, and force in American statecraft during the Truman years.”—Parameters