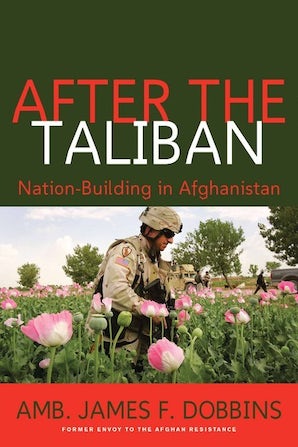 In October 2001, the Bush administration sent Amb. James F. Dobbins, who had overseen nation-building efforts in Somalia, Haiti, Bosnia, and Kosovo, to war-torn Afghanistan to help the Afghans assemble a successor government to the Taliban. From warlords to exiled royalty, from turbaned tribal chieftains to elegant émigré intellectuals, Ambassador Dobbins introduces a range of colorful Afghan figures competing for dominance in the new Afghanistan. His firsthand account of the post–9/11 American diplomacy also reveals how collaboration within Bush’s war cabinet began to break down almost as soon as major combat in Afghanistan ceased. His insider’s memoir recounts how the administration reluctantly adjusted to its new role as nation-builder, refused to allow American soldiers to conduct peacekeeping operations, opposed dispatching international troops, and shortchanged Afghan reconstruction as its attention shifted to Iraq. In After the Taliban, Dobbins probes the relationship between the Afghan and Iraqi ventures. He demonstrates how each damaged the other, with deceptively easy success in Afghanistan breeding overconfidence and then the latter draining essential resources away from the initial effort. Written by America’s most experienced diplomatic troubleshooter, this important new book is for readers looking for insights into how government really works, how diplomacy is actually conducted, and most important why the United States has failed to stabilize either Afghanistan or Iraq.

Amb. James F. Dobbins has held various State Department and White House posts, including assistant secretary of state for Europe, special assistant to the president for the Western Hemisphere, special adviser to the president and secretary of state for the Balkans, and ambassador to the European Community. He was the Clinton administration’s special envoy for Somalia, Haiti, Bosnia, and Kosovo and the Bush administration’s first special envoy for Afghanistan. Lead author of The RAND History of Nation-Building and The Beginner’s Guide to Nation-Building, Ambassador Dobbins lives in Washington, D.C., where he currently directs RAND’s International Security and Defense Policy Center.

“James Dobbins has written a wise, interesting, and balanced account of the diplomacy surrounding the foundation of the first Afghan government after the fall of the Taliban. Dobbins's book is part memoir and part an explication of how American diplomacy really works. After the Taliban is the first account from the inside about one of the real triumphs of American diplomacy after the Cold War: the creation of the conditions that allowed the Karzai government to emerge. As Dobbins relates, a good deal of the credit for this goes to the Iranians, and a good deal of the problems that have emerged since in Afghanistan are the result of the U.S. underfunding Afghan reconstruction and not committing enough boots on the ground for stability operations. It is a fascinating account of U.S. policymaking at its best and its worst.”—Peter Bergen, author of The Osama bin Laden I Know and Holy War, Inc.
“One of the wisest and most experienced of America’s foreign policy hands skillfully tells what went right and wrong in Afghanistan. This is a timely personal and policy story. Each chapter pulses with thoughtful lessons that were learned or should have been learned.”—Bob Woodward, assistant managing editor, Washington Post, and author of Bush at War
“Anyone who thinks diplomats are soft and diplomacy easy must read Jim Dobbins’s account of nation building in Afghanistan. He has been involved in dangerous and difficult efforts in Somalia, Haiti, Bosnia, and Kosovo as well as Afghanistan and knows of what he writes. Ambassador Dobbins gives a frank exposition of diplomatic achievement as well as lost opportunity. This read may not be pleasant for all, but it is a must. As Jim reminds us, we need to get better at nation building, not as a work of charity or benevolence, but as a cold calculation of our national security.”—Richard Armitage, former deputy secretary of state
“This compact, immensely readable and highly intelligent book could hardly be timelier, since Afghanistan is sure to be in the news for some time to come. Combining personal recollections with a fast-paced narrative and probing analysis, Jim Dobbins sheds fresh light on America’s war against the Taliban and on the reconstruction effort that followed. Dobbins is one of the nation’s best, smartest, and—it is worth emphasizing in the context of the story he tells here—bravest diplomats. Given his extensive earlier experience in practicing the twin arts of diplomacy backed by force and force backed by diplomacy, he was the right man for a tough job. And as he demonstrates here, he is also the right chronicler of a high-stakes and still-suspenseful episode in U.S. foreign policy. His book is must reading, with lessons for the future as well as vital insights into the recent past.”—Strobe Talbott, former deputy secretary of state and author of The Great Experiment: The Story of Ancient Empires, Modern States, and the Quest for a Global Nation
“After the Taliban is a superb read. U.S. Special Envoy to Afghanistan James Dobbins was masterful in orchestrating the peace following decades of violence and war. He stood up their nation’s fragile participatory government. Those of us on the ground in Afghanistan during the difficult days of 2001 so admired the skill with which he represented America. This book will be a primer in the study of diplomacy for decades to come.”—Gary Berntsen, former CIA officer and author of Jawbreaker: The Attack on Bin Laden and Al Qaeda.
“Ambassador Dobbins probably knows better than anyone else the strengths and weaknesses of the American approach to what they call “nation building” and this knowledge is perfectly well illustrated in the case of Afghanistan in the aftermath of 9/11. His is an insider's account of the successful diplomacy leading to the formation of the Karzai government, but he also highlights the lack of follow-through from the United States, the international community as a whole, and the Afghan authorities that left the field open for a resurgent Taliban.”—Lakhdar Brahimi, former special representative of the UN Secretary General for Afghanistan