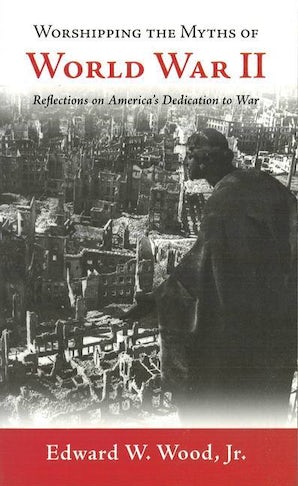 Reflections on America's Dedication to War

Is any war a “good war”? In Worshipping the Myths of World War II, the author takes a critical look at what he sees is America’s dedication to war as panacea and as Washington’s primary method for leading the world. Articulating why he believes the lessons of World War II are profoundly relevant to today’s events, Edward W. Wood, Jr., reflects on such topics as the killing of innocents, which became increasingly accepted during the war; on how actual killing is usually ignored in war discussions and reporting; on the lifetime impact of frontline duty, which he knew firsthand; on the widely accepted concept of “the Greatest Generation”; on present criteria for judging war memoirs and novels; on the fallacy that the United States won the war largely on its own; and on the effect that the Holocaust had on our national concepts of evil and purity. His final chapter centers on how the “war on terror” is different from World War II—and why the myths created about the latter hide that reality.

Edward W. Wood, Jr., was severely wounded in World War II. A retired city planner, he is the author of On Being Woundedand Beyond the Weapons of Our Fathers. His articles, essays, and poetry have appeared in publications ranging from the U.S. Air Force Academy journal War, Literature & the Arts to The Friends Journal. He lives in Denver.

“Wood has written a heartfelt and searing indictment for anyone who would imagine that World War II should be called good or its warriors great. He was there. He knows the life-long scars of war for those who do the killing. Relentlessly he unmasks the romancing of war and reminds of its brutality, especially in industrial war with its inevitable murder and maiming of thousands if not millions of civilians. He critically reviews much of the literature about World War II and finds hope for a world without war only through an honest recognition of what war really is.”—Bishop Frederick Borsch, professor at Lutheran Theological Seminary in Philadelphia and author of The Spirit Searches Everything: Keeping Life's Questions
“The aftermath of war stretches out for decades after war’s end. The truths and lies of war are best understood by the veterans of these conflicts, in particular those who served on the front lines. Ed Wood and his compatriots experience the human toll of war every day of their lives. We need to listen to them, and learn.”—Lori Grinker, photojournalist and author of Afterwar: Veterans from a World in Conflict
“Worshipping the Myths of World War II is an important addition to the literature of war and peace, exploring our nation’s descent into a calcified war mentality after World War II. Ed Wood is provocative and challenging, to be sure, but he also offers the solace of realistic and achievable means for breaking out of that mentality. He has given us clear direction for progress toward a ‘public maturity’ for the United States.”—Jeanne Herrick-Stare, senior fellow for civil liberties and human rights, Friends Committee on National Legislation
“The wizards of war have too long held sway in our country, telling us in Orwellian doublespeak that war is the best and only means to foster democracy and peace. Edward Wood pulls their curtain away, showing how politicians, pundits, and popularizers distort history by turning the tragedy and triumph of World War II into a parable about the virtues and benefits of all wars. And he shows, sadly, how Iraq is the Frankenstein creation of this misguided worldview. This is a powerful book that should give us all pause before we once again assent to the leadership of ideologues who assure us that might always makes right.”—Leonard Steinhorn, author of Greater Generation: In Defense of the Baby Boom Legacy
“This intelligent and eloquent rumination, by a wounded veteran of ‘the good war,’ with its impassioned renunciation of all wars, could not be more timely. Whatever the moral core of World War II, which Edward Wood freely acknowledges, that experience has been used to create myths, from Vietnam to Iraq, which perpetuate the idea that war is a proper solution for the world’s problems. Wood not only dissects that mythology, in its political and artistic forms, but he points, with persuasive argument, to the possibility of a world without war.”—Howard Zinn, author of Just War and editor of The Power of Nonviolence: Writings by Advocates of Peace
"Edward Wood's beautifully written and articulately argued little book should be on the bedside reading table of presidential advisors, state department movers and shakers, military historians, and all concerned citizens who have given thought to the growing frequency and intensity of the world's armed hostilities...It is a book to be read slowly, perhaps in small doses, so that its echoes stay with the reader during his waking day, nagging, pricking, at his consciousness."—War, Literature & the Arts: International Journal of the Humanities