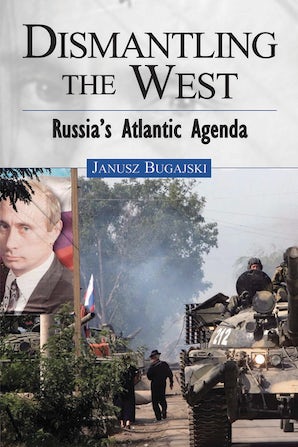 As the Russian invasion of Georgia in August 2008 demonstrated in no uncertain terms, Russia has developed into a neo-imperialist power seeking to restore its spheres of dominance, to undermine the emergence of a wider Europe, and to prevent the development of a coherent transatlantic community. Under the Vladimir Putin and Dmitri Medvedev presidencies, the Russian Federation has set for itself an ambitious foreign policy goal of counterbalancing U.S. influence and curtailing the expansion of Western multinational institutions. This strategy’s key component is to raise Russia’s global stature and to diminish America’s role by undermining the NATO alliance and neutralizing the European Union. The Georgian conflict demonstrates that Moscow is prepared to use military force to achieve its strategic objectives.

Janusz Bugajski explores how the Russian authorities have systematically sought to undermine Western interests through sustained diplomatic campaigns, increasing control over energy supplies, escalating political subversion, and the recent military campaign in the Caucasus. He provides evidence that the notion of a “strategic partnership” between Washington and Moscow is premature at best and a dangerous deception at worst. The struggle between the Western democratic model and the Russian authoritarian alternative will have a lasting impact on America’s global alliances.

Janusz Bugajski is the holder of the Lavrentis Lavrentiadis Chair at the Center for Strategic and International Studies in Washington D.C. Bugajski runs the South-Central Europe area studies program at the Foreign Service Institute, U.S. Department of State, and has been a consultant to the U.S. Department of Defense and the U.S. Agency for International Development, among other organizations. His most recent books include Atlantic Bridges: America’s New European Allies, with Ilona Teleki (Rowman & Littlefield, 2007) and Cold Peace: Russia’s New Imperialism (Praeger Publishers, 2004). He lives in Silver Spring, Maryland.

“Dismantling the West is a brilliant, timely, and sober analysis of the transformations experienced by Russia domestically under Vladimir Putin's rule and their consequences for Russia's foreign policy vis-a-vis its non-Russian neighbors, Europe, and the United States. Bugajski persuasively argues that Russia's pursuit of divide-and-conquer policies threatens to undermine Western institutions and requires a measured and sophisticated response involving both short-term tactical flexibility and longer-term strategic resolve. Bugajski shows how Russia can be made into a genuine partner of the West. The only question is whether Western leaders will have the foresight to think strategically and place their collective interests above their individual ones.”—Alexander J. Motyl, professor of political science at Rutgers University
“Janusz Bugajski has long been recognized as a deeply knowledgeable and clear-eyed observer of Russia. His latest book shows that the reputation is well deserved. Powerfully argued, thoroughly researched, and elegantly written, it arrives at exactly the right time given the debate now raging about whether Russia has reemerged as a great power. Bugajski argues that it has and that, furthermore, the Kremlin has developed a well-conceived and systematic strategy for dominating its immediate neighbors, isolating the United States, and weakening the ties uniting America and its European allies. In making his case, he provides a deft analysis of the complex interplay between internal politics and foreign policy in Putin's Russia. Even those who disagree with his analysis will be forced to reckon with his sobering and comprehensive assessment.”—Rajan Menon, Monroe J. Rathbone Professor of International Relations, Lehigh University, and Fellow, New America Foundation
“Most people thought that the idea of geopolitical competition with Russia went out the window with the end of the Cold War. Janusz Bugajski’s book is a sober reminder that it did not. Not only does a new, more assertive and nationalistic Russia seek to reclaim its sphere of influence or 'special interests' on its borders, but Bugajsksi warns us that Moscow’s agenda today is to again divide the Atlanticist West and expand the 'Eurasianist' zone deep into Europe proper. One need not agree with every word of his analysis to conclude that Russia is back as a problem and a competitor. Whether the current financial crisis will tame or further radicalize Russian foreign policy remains to be seen. In the meantime, this book is essential reading for those concerned about the future of Russia, Europe, and the free world.”—Ronald D. Asmus, executive director, Transatlantic Center, German Marshall Fund, Brussels, and former U.S. deputy assistant secretary of state for European affairs, 1997-2000