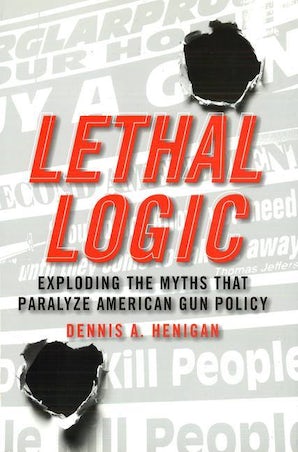 “When guns are outlawed, only outlaws will have guns.”

“An armed society is a polite society.”

Who hasn’t heard these engaging assertions, time and time again? Burned into the national consciousness by years of targeted, disciplined messaging by the National Rifle Association and others, they are just a few of the bumper-sticker slogans that have defined the gun control debate in America. Long ridiculed by gun control advocates, they are the first words that come to mind for most Americans when the gun issue is discussed.

This is the first book both to acknowledge the profound and deadly impact of the gun lobby’s bumper-sticker logic on the gun control debate and to systematically expose the misguided thinking at the core of the pro-gun slogans. Indeed, the author contends that the gun lobby’s remarkable success in blocking passage of lifesaving gun laws is the result, in large part, of its relentless and effective use of these simple and resonant messages. Their persuasive power has been a largely ignored influence on the current politics of gun control, in which the gun lobby wields unprecedented power in the Republican Party, while many Democratic Party leaders see the policy benefits of stronger gun laws as not worth the political risk of standing up to the NRA. The book contends that the current political stalemate over guns will never be broken until the pro-gun slogans are exposed as the cleverly disguised fallacies that they are.

Dennis A. Henigan is the Vice President for Law and Policy at the Brady Center to Prevent Gun Violence and Founder of its Legal Action Project. For twenty years, he has been a leading advocate for stronger gun laws, appearing dozens of times on national television shows, including 60 Minutes, The Today Show, Nightline, Larry King Live, and Dateline NBC. Henigan coauthored Guns and the Constitution: The Myth of Second Amendment Protection for Firearms in America (Aletheia Press, 1995).

"Henigan effectively disarms the gun lobby's arguments, fighting back with equal doses of common sense and uncommon insight. Lethal Logic will make it much tougher for spineless politicians in both parties to hide behind the NRA's superficial slogans and rationality-defying spin. A must-read for every American who longs to bring sanity to our nation's gun laws."—Arianna Huffington, co-founder and editor-in-chief of the Huffington Post
"No one knows more about our epidemic of gun violence and no one can state the case for sanity better than Dennis Henigan, who eviscerates the Orwellian myths through which the NRA justifies so much death. Henigan exposes how the gun lobby controlled one political party and intimidated the other. Lethal Logic is a bracing look at some very hard truths."—Richard North Patterson, author of Eclipse and Balance of Power
“Dennis Henigan has long been one of the nation’s leading thinkers on the gun violence issue. In Lethal Logic, he has given us a clear roadmap toward destruction of the ‘any gun, any time, any place’ arguments of the gun lobby. This book will save lives.”—Sarah Brady, Honorary Chair, Brady Campaign to Prevent Gun Violence
"Dennis Henigan has set out an insightful examination of the NRA's impact on the nation's gun debate. Lethal Logic offers a clear and thoughtful explanation of the methods and tactics used by the NRA to block common-sense gun laws and their effect on the political process."—U.S. Representative Carolyn McCarthy (D-NY)
"Anyone interested in the intersection of culture, psychology, and commerce can find valuable lessons in Lethal Logic. . . Henigan's insights into the marketing genius of the firearm industry are truly eye-opening. . . . Whatever your views on guns, their relationship to crime, and the meaning of the Second Amendment, Lethal Logic has something important to teach: A consistent, passionate message cultivates customer loyalty."—Editor's Rating of Four Stars, Business Week
“Of all the people who work for gun control organizations, Henigan is probably the most influential thinker. It was he who cooked up the batch of 1998-99 lawsuits by anti-gun mayors and trial lawyers against firearm manufacturers, wholesalers, stores, and trade associations. Ultimately, the suits failed to cripple the firearm industry, but they came close. Henigan is much more prescient than some of the other ‘intellectuals’ at gun control organizations in recognizing when a particular position has become untenable and needs to be abandoned. . . . Lethal Logic, although not an official book of the Brady Campaign, presents what will likely be the key talking points for gun control advocates and their media allies in the coming months and years.”—America’s 1st Freedom