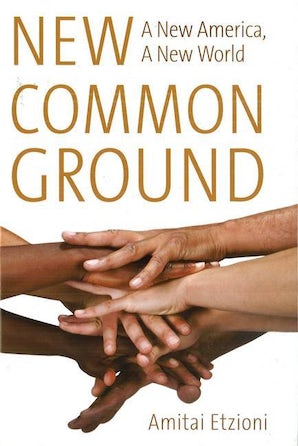 A New America, A New World

Race, age, political affiliation, country of origin, native language—too often Americans define themselves, and are defined, by the differences that separate them. But if the 2008 presidential campaign has taught us anything, it is that we as a people want to look beyond these divisions to the values and interests that unite us. New Common Ground embodies this zeitgeist, showing the ways that traditional boundaries among ethnic groups, political ideologies, and generations are blurring, and how to hasten the process. New Common Ground demonstrates that even though the deepest divide in America is said to be racial, the differences in viewpoints and values among races are declining, even in an age of increased intermarriage. On immigration and other controversial matters, Etzioni argues for diversity within unity and the means to achieve that necessary end. New Common Ground is a provocative and insightful look into how we as Americans can reach consensus not just in spite of our diversity but also in ways that strengthen our commitment to the good of one and all as we seek to overcome the divisiveness that sometimes results from identity politics. The book closes by looking beyond our shores to the bridges that bring America closer to the rest of the world.

Amitai Etzioni is University Professor at George Washington University, and the director of the Institute of Communitarian Policy Studies. In 1990, he founded the Communitarian Network, a nonpartisan organization dedicated to shoring up the moral, social, and political foundations of society. He served as senior adviser to the White House and president of the American Sociological Association. He taught at Harvard, Columbia, and Berkeley. Etzioni is the author of twenty-four books, most recently From Empire to Community: A New Approach to International Relations (Palgrave Macmillan, 2004) and Security First: For a Muscular, Moral Foreign Policy (Yale University Press, 2007). He resides in Washington, D.C.