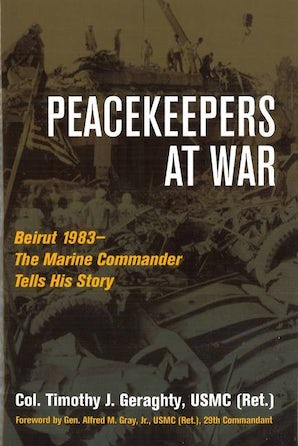 On October 23, 1983, nearly simultaneous suicide truck bombings killed 241 U.S. peacekeepers in their barracks at the Beirut International Airport (BIA) and 58 French paratroopers at their headquarters two miles north of BIA. In this long-awaited book, the Marine Corps commander of the U.S. Multi-National Peacekeeping Force that was destroyed by terrorists in Lebanon tells his story for the first time. Together, these suicide bombings comprised the largest nonnuclear explosion ever recorded and are now recognized as a seminal event leading to the current war on terrorism. Such acts of war revealed a new, highly effective tactic, which complemented the terrorist’s strategic goals—the withdrawal of the peacekeepers and Western influence from Lebanon and a change in U.S. policy. Peacekeepers at War lays out, in detail, a sequence of events leading up to the suicide truck bombings from which one can extrapolate the rationale, motives, and perpetrators behind it. Geraghty argues that the absence of any retribution against the perpetrators emboldened the terrorists to assume they could attack Americans and Western interests with impunity. This led to kidnappings, torture, and the murders of Americans and other Westerners. Peacekeepers at War will be of interest to general readers who want to learn more about this seminal event and its effects on the current global war on terrorism.

Col. Timothy J. Geraghty, USMC (Ret.) entered the Marine Corps in 1959 following graduation from St. Louis University. He commanded a reconnaissance company in Vietnam and, while a lieutenant colonel, served in a special assignment with the Central Intelligence Agency’s Special Operations Group. He commanded the Twenty-fourth Marine Amphibious Unit in Beirut in 1983 as part of the Multi-National Peacekeeping Force. Upon his retirement from the Corps, he returned to the CIA to serve in the Counterterrorism Center. He later worked in private industry and currently resides in Phoenix, Arizona.

“The 1983 bombing of the U.S. Marine Beirut compound and of the nearby French paratroopers’ building was a declaration of war by radical Islamists against Western influence in the Middle East. It marked the beginning of an asymmetrical war, one that continues to this day. The Marines in Lebanon, under the command of Col. Tim Geraghty, realized the magnitude of the challenge and the seriousness of the dangers this meant to the security of the free world. Yet it took the politicians in Washington 18 more years to reach the same conclusions and to connect the dots; and this was only after terrorists attacked the U.S. homeland, killing 10 times as many people. Colonel Geraghty was made the scapegoat of Washington’s failed policies and political blunders in the Middle East. For more than two decades Tim Geraghty carried that heavy burden in silence but with the courage and dignity of a Marine officer. Now, 25 years after the fact, he speaks out. Maybe this time someone will listen.”—Claude Salhani, editor, Middle East Times (Washington, D.C.) and former chief of the UPI Bureau in Beirut (1981-1984)
“He might possibly have become a Commandant of the United States Marine Corps. Instead, Colonel Tim Geraghty, Commander of the 24th Marine Amphibious Unit in Lebanon, which received a devastating suicide attack by a terrorist-driven truck filled with explosives on 23 October 1983, became an early casualty of the Global War on Terrorism. Taking responsibility for the catastrophe, Colonel Geraghty resigned from the Marine Corps despite the fact that his recommendations for improving the security of his unit at the Beirut Airport and his underlining that the changes in his original mission of peacekeeping increased his vulnerability had gone largely unheeded in Washington by his superiors. His resignation represented a significant loss to the Marine Corps and the nation.”—Duane (Dewey) Clarridge, founder and first chief, Counterterrorism Center
“Part fascinating autobiography of a genuine modern American patriot, part insider’s account of critically important military and diplomatic history, Peacekeepers at War is must reading for anyone who desires to understand the events that precipitated that October 23, 1983, Islamic terrorist attack that murdered 241 sleeping peacekeepers. America’s precipitous withdrawal of the remaining Marines immediately following that tragic attack was specifically mentioned by Osama bin Laden in 1998 as evidence that America was unwilling to accept casualties, and almost certainly was a factor in his decision to attack America on 9/11. Put simply, the Marine deployment in Beirut was a historically significant event, and no one better understands what went wrong than the commander on the ground, Colonel Geraghty. Highly recommended.”—Prof. Robert F. Turner, University of Virginia, counsel to president’s Intelligence Oversight Board at the time of the Beirut bombing & later first president of the United States Institute of Peace
“Peacekeepers at War is the most complete treatise ever written on the military involvement of the United States in a potentially hostile Lebanon, circa 1982-1984. Colonel Tim Geraghty, the superb Commander of the 24th Marine Amphibious Unit at Beirut International Airport on October 23, 1983, when terrorists brutally murdered 241 of his men, provides a primer for those who contemplate sending our military forces on potentially hostile peacekeeping missions."—General P. X. Kelley, 28th Commandant of the Marine Corps
"Peacekeepers at War provides intimate insight into the dynamics involved as 24th MAU was probed and tested by Islamist extremists bent upon an ideological war in which we still are engaged, not only in Iraq and Afghanistan, but here at home as well. . . . [A] meticulously detailed report from the on-scene commander. It is a military tome that I'm sure scholars will mine for years to come, and a historical tale of challenge, courage, and determination in the face of horrific adversity that needed to be told."—Leatherneck
"Geraghty's book is an eye-opener for anyone who wants to learn more about what happened in 1983 before and after the awful destruction of the Marine barracks in Beirut."—Military Heritage