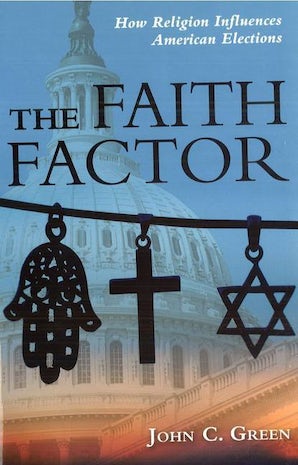 The impact of religion on the 2004 presidential election results provoked widespread consternation and surprise. Given the results’ intensity and closeness, however, the role of religion should not have come as a shock. In fact, religion and faith have long played a vital role in American elections, and here, John C. Green explores the link and how it has gradually changed. He concludes that an “old religion gap”— that is, the long-standing political differences among religious communities—has been supplanted by a “new religion gap” of political divisions based on religious behavior and belief. Green puts the differences into context and documents the changing role of religion in politics over the last sixty years.

Covering three areas of religion that tend to influence election outcomes, Green illuminates the meaning of religious belonging, behaving, and believing in current political context. Each of these aspects of religion affects the way people vote and their views of issues, ideology, and partisanship. He reviews the importance of “moral values” in the major parties’ coalitions and discusses the role religious appeals have in presidential campaigns. Given the emphasis on religion’s influence on American politics and elections in recent years, this book serves as a cogent reminder that the situation is not new and offers a careful analysis of the role faith plays in electing government officials.

“A must-read for anyone interested not only in why religion has become more important in elections, but also in how. . . . It does not offer sweeping generalizations. . . . But it is extremely valuable for anyone trying to figure out where the United States is headed.”—Political Science Quarterly
“Green . . . takes a detailed look at the poll results from recent presidential elections and overturns a number of preconceptions about the role religion plays. . . . What Green’s detailed statistical analysis shows is that religion does indeed matter, but in ways that we have only begun to fathom. Equipped with Green’s more nuanced appreciation of religion’s role in voting preferences, we can map out new features in the political landscape. . . . In a context in which secular pollsters too often set the agenda for political analysis, Green’s fascinating and challenging book offers an important corrective.”—Christian Century Magazine
“Highly recommended.”—Choice
“This new book, built on detailed public opinion polls, will cement Green’s position as our preeminent student of the relationship between religion and American politics.”—Los Angeles Times
“No one—absolutely no one—understands the religious and political landscape in American better than John Green. He deftly cuts through the confusion, bombast, anger, and fear that have surrounded our recent elections to tell a clear and compelling story about how we arrived at this point. Anyone who seeks to understand contemporary American politics needs this book.”—Amy Sullivan, contributing editor, The Washington Monthly
“From issues in religion gaps to gender, age, and activism influences, this is a ‘must’ for any library seeking to explore connections between religion and American political processes.”—Midwest Book Review