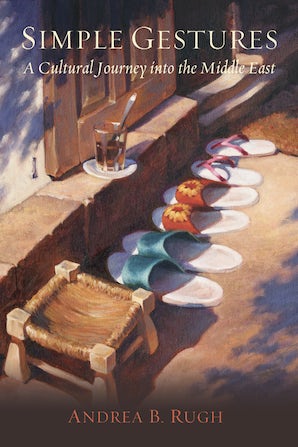 A Cultural Journey into the Middle East

The Greater Middle East poses major challenges for the United States. Yet despite decades of intense involvement in Middle Eastern affairs, most Americans still know little about the cultures of the region. Simple Gestures describes one American’s efforts over forty years to better understand the society in the countries where she lived and worked: Lebanon, Syria, Egypt, Saudi Arabia, Yemen, the United Arab Emirates, Pakistan, and Afghanistan. In her multiple roles, Andrea Rugh came to know people from many walks of life. As a mother, she became friendly with local families. As the wife of a diplomat, who later became an ambassador to two countries, she came to know social elites in the Persian Gulf. As a professional anthropologist, she spent time with people from parts of society who are usually inaccessible to foreigners. Culture is revealed most clearly in the way people interact with one another—in the way they treat the poor, the elderly, and women; how they rear and educate their children; and in the way they react to a foreigner suddenly thrust in their midst. Describing the satisfactions, sudden insights, challenges, and miscommunications that come from being immersed in a foreign culture, Rugh brings to life on the page the places and the people she met along the way.

Dr. Andrea Rugh has been a technical adviser for U.S. Agency for International Development projects in the Middle East, South Asia, and Africa and a research associate for the Harvard Institute of International Development, and has worked for Save the Children and UNICEF in Pakistan and Afghanistan. She has written several books on Middle Eastern culture and society, including Family in Contemporary Egypt (Syracuse University Press, 1984), Within the Circle: Parents and Children in an Arab Village (Columbia University Press, 1997), and The Political Culture of Leadership in the United Arab Emirates (Palgrave Macmillan, 2007). Currently an adjunct scholar at the Middle East Institute in Washington, D.C., she lives in Garrett Park, Maryland, and Woods Hole, Massachusetts.

"Simple Gestures, and indeed the rich life Andrea Rugh has made for herself, is based on her genuine interest in all that makes us different and all the many ways we are the same. Dr. Rugh's non-judgmental explanations of the cultural differences and similarities she has encountered allow her readers to come closer to understanding Middle Eastern cultural practices, including some that many Westerners find remote or alien, such as honor killings, the veil, and arranged marriages. In so doing she also helps Westerners to see their own cultural practices--which often go unexamined--in a new light. This is truly a remarkable book and thoroughly enjoyable read.”—Wendy Chamberlin, president, Middle East Institute, and former ambassador to Pakistan
“Andrea Rugh has written a remarkably honest and insightful account of what it was like to be both a diplomat's wife and a professional anthropologist in the Muslim world. Her avid interest in people and her respect for other cultures enabled her to build bridges and forge lasting friendships wherever she went. One wishes that President Obama had read her chapters on Afghanistan before getting himself committed to a military strategy in that country.”—George Lane, former ambassador to the Yemen Arab Republic
“This wonderful memoir has the ring of authenticity that only someone who has lived and worked in the Middle East can provide. A trained anthropologist whose innate sensitivity has given her extraordinary access to the poor and powerful alike, Dr. Rugh has produced the rarest of all studies - the real thing.”—Robert Pelletreau, former assistant secretary of state for near Eastern affairs and former ambassador to Bahrain, Tunisia, and Egypt
“Dr. Rugh’s fast-paced and engaging narrative is a must read for anyone wanting reliable insight into Middle Eastern societies and how they have changed over time. Even though I’m a bit of an old hand myself when it comes to this part of the world, I couldn’t put the book down.”—Eleanor Doumato, historian and author of Teaching Islam: Textbooks and Religion in the Middle East
"Within minutes of starting to read Simple Gestures, I was hooked. I wanted to travel everywhere Andrea Rugh had, meet everyone she did, and enjoy the small daily pleasures she brings to life so vividly. An outsider to the region, she nonetheless captures its humanity with great objectivity, sensitivity, and intelligence."—Dr. Leila Fawaz, Issam M. Fares Professor of Lebanese and Eastern Mediterranean Studies and Founding Director, Fares Center for Eastern Mediterranean Studies, Tufts University
“A rich and absorbing read.”—ForeWord