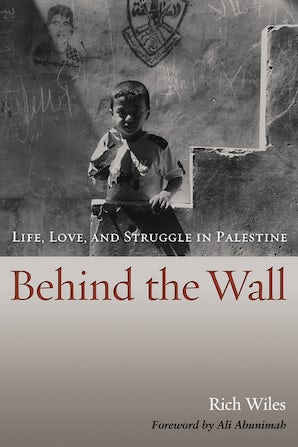 Life, Love, and Struggle in Palestine

Of the approximately seven million Palestinian refugees around the world, more than 650,000 are living in camps along the West Bank and Gaza Strip. Having been forced from their homes, either through violence or the threat of it, those living in these camps, Rich Wiles asserts, suffer greatly from Israeli Army incursions, violence, poverty, and desperation—often even more severely than in the surrounding cities or villages. Although much media attention has been drawn to the area’s political climate, the stories of its dispossessed people have gone largely underreported. Having spent much of his time in Palestine since 2003, Wiles offers a glimpse inside the West Bank’s refugee camps between 2006 and 2007 through a collection of oral histories, vignettes, and photographic portraits. In these pieces, Wiles recounts conversations with Palestinians of all ages, including survivors of al-Nakba, released child and female prisoners, parents trying to rear their children amid the violence of military occupation, and exiles struggling for the right of return to their original villages. These intimate portrayals not only offer clues to understanding the physical and psychological effects of exile, colonization, and occupation, they also reveal the true Palestinian psyche, one that is at once full of life, love, and strength. Through both written word and photographic image, Behind the Wall allows Palestinians to speak for themselves.

Rich Wiles is a British photographic artist and human rights activist. He is the Coordinator of International Relations at Lajee Center in Aida Refugee Camp where he directs collaborative youth arts projects; he has also run similar projects in UK schools. Exhibitions of his photographs and youth arts projects have been shown extensively across Europe, in Australia, in the United States, and in Palestine itself. His photos have been published by the British Journal of Photography, Times Educational Supplement, and Yorkshire Post, and in Palestine by Haq-Al-Awda and Al Majdal. He currently lives in Palestine.

“Rich Wiles's work is exemplary. Clear-sighted and passionate, he provides the frame and the focus for the Palestinians to tell their own stories. These are stories that the world needs to hear.”—Ahdaf Souief, political commentator and author of Mezzaterra: Fragments from the Common Ground
“Palestine is the most important issue for humanity because its justice is so long overdue, and its people have been so betrayed, yet it exemplifies a courage and endurance no oppressor can kill. In his superb collection Behind the Wall, Rich Wiles captures these qualities in the struggles and faces of those who will not allow us to forget.”—John Pilger, award-winning documentary filmmaker, journalist, and author of Freedom Next Time
“Behind the Wall is a book of powerful stories, conveyed most eloquently by the author and told by ordinary people describing their extraordinary existence. Rich Wiles’s captivating narrative transcends politics and rebuffs the very desensitizing nature of news related to Palestine and Israel. Instead, Behind the Wall delves into the heart of the conflict—the disaffected Palestinians—including the original refugees of 60 years ago and their descendents, who continue to struggle for rights and recognition. Their undying resilience will endure until rights are restored, justice is delivered, and freedom is attained. Until then, those refugees, feeding on memory and hope, will continue to exist behind the Wall. While they may be physically trapped, their stories don’t have to be. Rich Wiles’s book is a most admired effort at getting the story out. This book must be read, and forever remembered.”—Ramzy Baroud, journalist, former Al-Jazeera producer, and author of The Second Palestinian Intifada: A Chronicle of a People's Struggle
“A moving insight into the individual experiences of life under occupation and imprisonment. The book allows the people themselves to speak about their horrific experience and their remarkable struggle for survival and normality against all odds. A most valuable and humane contribution to a better understanding of the Palestinian plight in the face of an escalating Israeli brutality and inhumanity.”—Ilan Pappé, historian, human rights activist, and author of The Ethnic Cleansing of Palestine
“Rarely has the Palestinian experience of occupation—its everyday frustrations, cruelties and injustices—been captured better than in these richly varied and very human stories told by Rich Wiles. Too often the voice of the Palestinians is denied or overlooked: this book seeks to correct that additional indignity by reminding the reader that behind Israel's Wall a people continues to demand the freedoms most of us take for granted.”—Jonathan Cook, journalist and author of Disappearing Palestine: Israel’s Experiments in Human Despair
"The book offers a picture of ordinary Palestinians that is both expansive and vivid. . . .manages to address Palestinians' deep frustrations in creative ways."—Christian Science Monitor