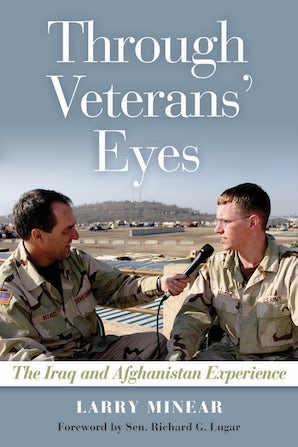 The Iraq and Afghanistan Experience

As of early 2010, more than two million U.S. troops have served in Iraq and Afghanistan. Yet the American public is neither much engaged in the issues of these two wars nor particularly knowledgeable about the troops’ experiences, which have ranged from positive and energizing to searing and debilitating. Based on scores of interview—some culled from the Library of Congress Veterans History Project and others conducted by the author himself—Through Veterans’ Eyes presents a composite narrative of the experiences of U.S. service personnel in Iraq and Afghanistan.

Larry Minear quotes more than 175 veterans by name and includes a dozen of their own photos from the conflict theaters. Thematic chapters cover duty and service, politics, cultural and ethical challenges, relationships to local populations, and reentry into American society. Neither pro-war nor anti-war, Minear’s approach encourages veterans to express their views on issues critical to the nation. What has motivated U.S. military personnel to enlist? What specific challenges have they faced in Iraq and Afghanistan? What have been the impacts of deployment on their families and communities? Is their experience changing their views of their country and the world? What lessons may be learned from their stories? Veterans’ candid responses to these and other probing questions deserve pondering.

For the past twenty years Larry Minear has worked as a researcher on international and internal armed conflicts, interviewing aid workers, soldiers, and local populations in Africa, the Balkans, the Middle East, Latin America and the Caribbean. The former director of the Humanitarianism and War Project at Brown and then at Tufts University, he is the author, co-author, or editor of several dozen research monographs and fourteen books, including (with Ian Smillie) The Charity of Nations: Humanitarian Action in a Calculating World. He retired in 2006 and resides in Orleans, Massachusetts.

"It is essential that this volume (or something like it) be widely read before the nation cavalierly commits its troops to battle. Thus, Minear has rendered a valuable service in publishing this book. His book is written and edited with admirable skill; it is organized into an orderly, sensible continuum. Recommended. All leadership levels."—Choice
“Larry Minear has given voice to an entire generation of combat veterans whose experience will shape our society for decades to come. The conflicts in Iraq and Afghanistan will henceforth serve as the dominant reference points for the American debate on issues of war and peace, just as World War II, Korea, and Vietnam shaped our national attitudes for the past half century. If you want to know what our soldiers and Marines have taken away from their service in America’s latest wars, his balanced and insightful account is the perfect place to start.”—Amb. James F. Dobbins, former special envoy to Afghanistan and author of After the Taliban: Nation-Building in Afghanistan
“Minear’s lens is compassionate; it does not flinch from nor dwell on uncomfortable facts. His own narrative does not embellish the service and sacrifice of soldiers and their families; these are clear enough to the reader. This view of United States military engagements in the last decade, through the eyes of its veterans, will likely leave the reader transformed. Through Veterans’ Eyes weaves a tapestry of experience of U.S. military personnel in, and after they return from, recent warzones.”—Karen Guttieri, faculty, Naval Postgraduate School, Monterey, California
“Larry Minear takes us on a wide-ranging tour of going to war and coming home. He sets the scene, then lets the people who've lived it speak for themselves in their own words, unvarnished, without spin. Outsiders will come away with new understanding. Insiders will nod and know they have been heard."—Kristin Henderson, military spouse and author of While They’re at War: The True Story of American Families on the Homefront
“To truly understand a combat veteran, you have to be one. Minear’s sterling collection of first-hand accounts and thoughtful analysis is as close as you can get to the complex experience of war without ever setting foot on a battlefield. It's an important contribution toward helping our military, and our society, better appreciate the extraordinary sacrifices of these men and women. Through Veterans’ Eyes is honest, gritty and sometimes unpleasant. Whether we have the stomach for it, is an entirely different matter."—Maj. Greg Heilshorn, state public affairs officer, New Hampshire National Guard
"Thorough and readable, and an impressive range of voices [are] heard.”"—Journal of Folklore Research