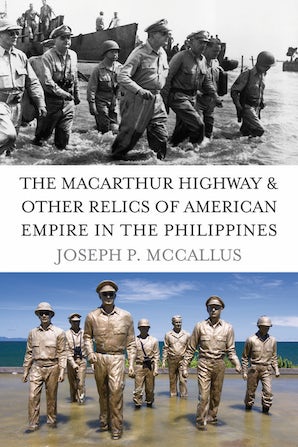 It has been more than a century since the American conquest and subsequent annexation of the Philippines. Although the nation was given its independence in 1946, American cultural authority remains. In order to locate and lend significance to the relics of American empire, Joseph McCallus retraces the route Gen. Douglas MacArthur took during his liberation of the country from the Japanese in 1944 and 1945. While following MacArthur’s footsteps, he provides a historical and geographical account of this iconic soldier’s military career, accompanied by a description of the contemporary Philippine landscape. McCallus uses the past and the present to explore how America influenced the country’s political and educational systems and language, as well as the ramifications of the continued U.S. military presence and the effects of globalization on traditional Filipino society. He examines the American influence on its architecture and introduces to the reader the American expatriate business community—people who have lived in the Philippines for decades and continue to help shape the nation. The MacArthur Highway and Other Relics of American Empire in the Philippines is an absorbing look at how American military intervention and colonial rule have indelibly shaped a nation decades after the fact.

Joseph P. McCallus has conducted academic research in the Philippines since 1986. He is the author of American Exiles in the Philippines, 1941–1996: A Collected Oral Narrative, a study of the American expatriate community, and he edited and annotated Gentleman Soldier: John Clifford Brown and the Philippine-American War. He has published journal articles dedicated to Philippine studies, particularly the propaganda of both the Philippine communist and anticommunist movements. He is a professor of English at Columbus State University in Georgia.

“Using a wide range of sources, including oral accounts and unpublished narratives, buttressed by his own personal experience as an expatriate in the Philippines, Joseph McCallus presents a wide-ranging and frank view of the Philippines and the U.S. colonial legacy. Using as a base Gen. Douglas MacArthur’s route during the 1944–45 liberation campaign, McCallus weaves into this extremely interesting read multifaceted aspects of the American impact on the Philippines, past and present. With ease, he takes the reader on a journey of time and space to present events of long ago and of the recent past, linking everything into a coherent whole. Even Filipino readers will find things that are new here. This work will spark discussion and debate–the hallmark of a successful book.”—Ricardo T. Jose, professor of history, University of the Philippines
“Joseph McCallus has crafted an incisive, finely written examination of the complex relationship between the United States and the Philippines. Drawing on his broad knowledge of that relationship, he illuminates the historical, cultural, geographical, social, military landscape that evolved throughout the twentieth century and the impact on today’s Philippines. His examination of Douglas MacArthur’s controversial status as both liberator and divisive force in the Philippines is outstanding.”—Peter F. Stevens, author of The Voyage of the Catalpa and The Rogue’s March