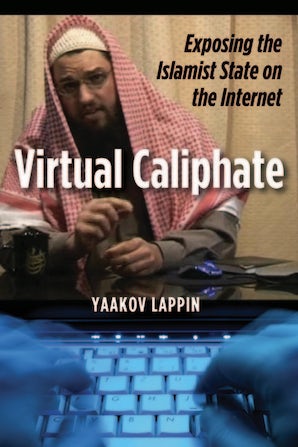 Exposing the Islamist State on the Internet

In 1924, the last caliphate—an Islamic state as envisioned by the Koran—was dismantled in Turkey. With no state in existence that matches the radical Islamic ideal since, al Qaeda, which sees itself as a government in exile, along with its hundreds of affiliate organizations, has failed to achieve its goal of reestablishing the caliphate. It is precisely this failure to create a homeland, journalist Yaakov Lappin asserts, that has necessitated the formation of an unforeseen and unprecedented entity—that is, a virtual caliphate. An Islamist state that exists on computer servers around the world, the virtual caliphate is used by Islamists to carry out functions typically reserved for a physical state, such as creating training camps, mapping out a state’s constitution, and drafting tax laws. In Virtual Caliphate, Lappin shows how Islamists, equipped with twenty-first-century technology to achieve a seventh-century vision, soon hope to upload the virtual caliphate into the physical world. Lappin dispels for the reader the mystery of the jihadi netherworld that exists everywhere and nowhere at once. Anyone interested in understanding the international jihadi movement will find this concise treatment compelling and indispensable.

Yaakov Lappin is a journalist for the Jerusalem Post. His groundbreaking and exclusive coverage of jihadi activity on the Internet has appeared in the London Times, Jerusalem Post, and Ynetnews, among other media outlets. A number of the author’s reports for the London Times focused on an online declaration of war issued by notorious Islamist leaders in Britain six months before the July 7, 2005, London Underground bombings. He lives in Tel Aviv, Israel.

"A top pick for any library strong in computer sociology or middle east issues."—California Bookwatch
“Virtual Caliphate takes the reader into the heart of a disturbing and global Internet phenomenon. Lappin proposes a startling new way of viewing what jihadis are doing online, and his accessible prose invites readers from all walks of life to join him in exploring the jihadi Internet presence.”—Yossi Melman, writer and commentator for the Israeli daily newspaper Haaretz
“In the grand debate about the role of Islam in the conduct of terrorism, Virtual Caliphate goes a step further by placing that debate in the context of the Internet. Lappin makes an outstanding contribution to the literature on how online tactics are used to break down the initial raw mindset of potential terrorist recruits and create a virulent anti-Western audience ready to perform or support terrorist acts. Virtual Caliphate is a must read for the general audience, students, and policy analysts in Jerusalem and Washington as well as in Cairo and Riyadh.”—Raymond Tanter, emeritus professor, University of Michigan; adjunct professor, Georgetown University
“Virtual Caliphate is one of the very best books I have ever read on how the Internet has totally transformed the international jihad in the past decade. Yaakov Lappin has written the definitive book on the most pressing national security issue we face today—the radicalization of Islamic extremists on the Internet. Lappin has demonstrated with mesmerizing detail how the global jihad village has emerged on the Internet. He has written a book that will capture the attention of anyone—from the public to senior policymakers—concerned with radical Islam. It is must reading.”—Steven Emerson, executive director of the Investigative Project on Terrorism and author of American Jihad: The Terrorists Living Among Us