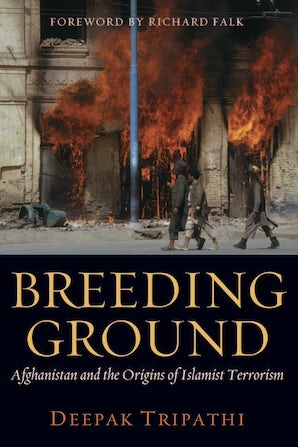 Afghanistan and the Origins of Islamist Terrorism

Beginning with the Communist Saur Revolution of 1978 and continuing through Gen. David Petraeus’s 2010 appointment replacing Stanley McChrystal as commander of U.S. forces in Afghanistan, this book is an inside account of one of the most vicious conflicts fought between the two Cold War superpowers: the Soviet war in Afghanistan (1979–89). Analyzing the behind-the-scenes decisions made in Moscow, Washington, and Kabul, former BBC correspondent Deepak Tripathi shows how that conflict transformed Afghanistan into a sanctuary for terrorism.

Explaining how Afghanistan descended into a civil war from which the Taliban emerged, Tripathi explores the ways in which the country ultimately became a grotesque mirror image of the anticommunist alliance of U.S. forces and radical Islamists in the Cold War’s final phase. Calling for a departure from the current pursuit of military strong-arm tactics, he advocates an approach that is centered on development, internal reconciliation, and societal reconstruction in Afghanistan.

DEEPAK TRIPATHI is a British historian and former journalist whose career (1974–2000) was spent primarily with the BBC, where he was a correspondent, editor, and commentator. In the early 1990s, Tripathi set up the BBC bureau in Kabul and was the resident correspondent in Afghanistan. He has also reported from Syria, Pakistan, Sri Lanka, and India. He is the author of Overcoming the Bush Legacy in Iraq and Afghanistan and Breeding Ground: Afghanistan and the Origins of Islamist Terrorism. Tripathi received his PhD from the University of Roehampton, where he is an honorary research fellow. He lives near London.

"Deepak Tripathi’s third book . . . is a political-military history of modern Afghanistan that’s sharp and to the point."—Palestine Chronicle
“In his concise yet powerful book, [Tripathi] details the interlocking decisions and strategies that inflamed the conflict and produced a new and dangerous historical context.”—Foreign Policy Journal
“The Afghanistan killing fields threaten to become for President Obama what Vietnam’s were for President Johnson: a political death trap both for Americans and their European allies. No one has better explained the making of this situation than Deepak Tripathi in this book. A long-time BBC correspondent in Afghanistan and Pakistan, Tripathi not only dealt every day with the tribalism and poppy growing that now rule the Afghans, but has also exploited newly released Russian, British, and U.S. documents to provide a superb, if sometimes terrifying, historical context—including Ronald Reagan’s massive help to those who are now killing American soldiers. Tripathi’s work should be read by anyone who hopes to understand this tragedy.”—Walter LaFeber, historian, formerly the Andrew H. and James S. Tisch Distinguished University Professor at Cornell University
“Deepak Tripathi’s penetrating analysis of the Afghan tragedy comes at just the right time, when the United States is becoming more deeply embroiled in an impossible situation. He approaches the Afghan puzzle with a judicious historical perspective that clarifies the way in which hysteria about terrorism continues to obscure the truth about U.S. policy, the Taliban, and the suffering people of Afghanistan. I wish this book could be put in the hands of President Obama and his advisers. It would be a sobering corrective to self-delusion. Failing that, we can only hope that a better-informed public, educated by books like this one, will demand a change.”—Howard Zinn, professor emeritus, Boston University, and author of A People’s History of the United States
“A book for anyone who wants to understand Afghanistan’s transformation from a relatively tolerant and peaceful tribal setting to a society ridden by a ‘culture of violence’ through the agency of external actors. Tripathi offers an array of unique and valuable insights into both the local processes and global forces that have conspired to devastating effect on the country since the 1970s. This authoritative account combines the experience of a journalist stationed in the country with the archival savvy of a veteran researcher.”—Shah Mahmoud Hanifi, associate professor of history, James Madison University
“In this incredibly well-documented book, Deepak Tripathi describes in painful detail the sufferings of the Afghan peoples at the hands of those who are playing the Grand Chess Game—above all the Russians, the Americans, and the British—for their own selfish, anti-Muslim reasons (they would have not done all that to a Christian country in Europe). There can be only one conclusion to this shocking book: Hands off Afghanistan, and if help is needed, then from people to people, not via violent and corrupt governments.”—Johan Galtung, founding director, International Peace Research Institute, Oslo, and founder, TRANSCEND International, a Network for Peace and Development 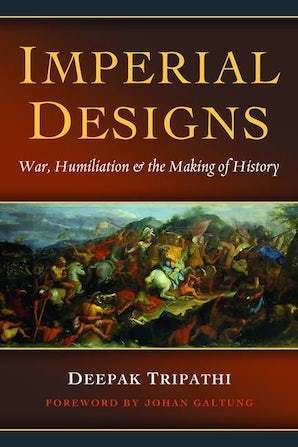