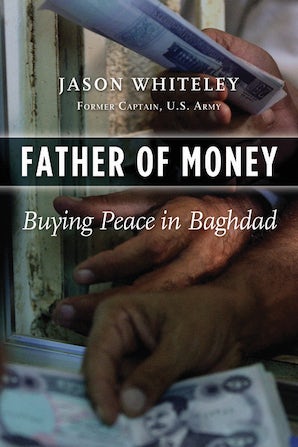 In March 2004, Capt. Jason Whiteley was appointed the governance officer for Al Dora, one of Baghdad’s most violent districts. His job was to establish and oversee a council structure for Iraqis that would allow them to begin governing themselves.The nature of persuading Iraqis to support the coalition quickly progressed from simply granting them privileges to ignore curfews to a more complex relationship defined by illicit dealing, preferential treatment, and a vicious cycle of assassination attempts. In these streets of Al Dora,Whiteley was feared and loved as the man they called Abu Floos—or “Father of Money.”Father of Money is the story of Captain Whiteley’s journey into a moral morass, where bribes and blood money, not principle, governed the dissemination of power and possibility of survival. The Iraqi people did not have the patience to withstand daily violence while they waited for the American ideals to crystallize. Captain Whiteley acted to fill this void by allying himself with the leaders who had the best chance of consolidating power, even if they were former insurgents. Eventually, because of these efforts,Captain Whiteley was himself targeted for assassination, signaling an end to his period of extensive influence.Although Captain Whiteley viewed this as a failure, he knew that he needed to reveal a part of Iraqi society that few Americans would ever witness. By delving into the Iraqi culture,Captain Whiteley had dispensed justice, divined futures, and bestowed fortunes in a way the Iraqi people understood and appreciated.This is the story of how change actually occurs in a society devoid of order.

Jason Whiteley was born and raised in Lumberton, Texas, a small community near the Gulf Coast. He attended the United States Military Academy at West Point, where he graduated in 1999.

From 2004 to 2005, he served in Baghdad as a governance officer in the Al-Dora District of Southern Baghdad. He left the Army in 2005 to pursue a law degree and a master of science in foreign service at Georgetown University, both of which he received in 2009.

"While I especially wish I had read this book before I went to Iraq, I am glad to have been able to read it after I came home. Some other well-meaning American is there now, no doubt meeting some of the same questions, ignorant of the other Americans who walked those same streets. I hope he gets the chance to read Jason Whiteley’s book."—Peter Van Buren, wemeantwell.com
"Father of Money is a hugely enjoyable read, a profoundly honest and powerful memoir by a U.S. Army officer forced to negotiate the moral abyss that was Iraq in 2004. Further, it is a searing analysis of the institutional blunders and foolhardy policies that characterized Bush and Rumsfeld’s invasion and their devastating impact on brave men and women who went to Iraq to serve their country. Whiteley’s courage in writing this book is inspiring."—Tom Roberts, director, A Company of Soldiers, PBS Frontline
"Father of Money tells the story of the Iraq war as it actually happened. Far from a tale of duty, honor, god, and country, Jason's year in Iraq was filled with moral ambiguity, and fraught with fragile loyalties and progress that was frustratingly ephemeral. He documents the momentous challenges of the U.S. occupation from the ground level, the brotherhood of war, and the imperfect compromises that marked the intersection of the U.S. government and Iraqi culture."—Garrett M. Graff, author of The Threat Matrix: The FBI at War in the Age of Global Terror
“After serving two year-long tours in Baghdad, including four months with Jason Whiteley in Al Dora in 2004, I can tell you that Father of Money is a riveting book that accurately describes what it was like trying to establish local governance after the invasion of Iraq. It was innovative junior officers like Captain Whiteley who first realized that ‘money is a weapon system’ that buys protection for U.S. troops, allegiance from local power brokers, and has the potential to douse the flames—albeit tragically only for a short period in this case—of ethnic violence and civil war. I strongly recommend this book to all junior and mid-level officers in preparation for future deployments where the army will likely be asked again to help establish local governance and jump-start the local economy.”—Lt. Col. David T. Seigel, USA (Ret.), professor, U.S. Army Command and General Staff College