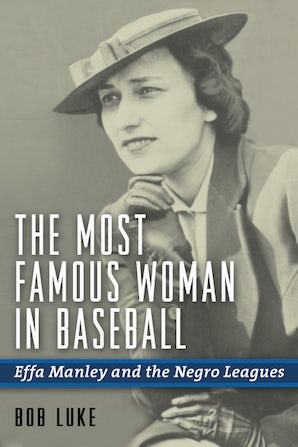 The Most Famous Woman in Baseball

Effa Manley and the Negro Leagues

Never one to mince words, Effa Manley once wrote a letter to sportswriter Art Carter, saying that she hoped they could meet soon because “I would like to tell you a lot of things you should know about baseball.”
From 1936 to 1948, Manley ran the Negro league Newark Eagles that her husband, Abe, owned for roughly a decade. Because of her business acumen, commitment to her players, and larger-than-life personality, she would leave an indelible mark not only on baseball but also on American history. Attending her first owners’ meeting in 1937, Manley delivered an unflattering assessment of the league, prompting Pittsburgh Crawfords owner Gus Greenlee to tell Abe, “Keep your wife at home.” Abe, however, was not convinced, nor was Manley deterred. Like Greenlee, some players thought her too aggressive and inflexible. Others adored her. Regardless of their opinions, she dedicated herself to empowering them on and off the field. She meted out discipline, advice, and support in the form of raises, loans, job recommendations, and Christmas packages, and she even knocked heads with Branch Rickey, Bill Veeck, and Jackie Robinson.
Not only a story of Manley’s influence on the baseball world, The Most Famous Woman in Baseball vividly documents her social activism. Her life played out against the backdrop of the Jim Crow years, when discrimination forced most of Newark’s blacks to live in the Third Ward, where prostitution flourished, housing was among the nation’s worst, and only menial jobs were available. Manley and the Eagles gave African Americans a haven, Ruppert Stadium. She also proposed reforms at the Negro leagues’ team owners’ meetings, marched on picket lines, sponsored charity balls and benefit games, and collected money for the NAACP. With vision, beauty, intelligence, discipline, and an acerbic wit, Manley was a force of nature—and, as Bob Luke shows, one to be reckoned with.

Bob Luke is the author of three books, including The Baltimore Elite Giants: Sport and Society in the Age of Negro League Baseball and numerous articles on the history of baseball and the Negro Leagues. He lives in Garrett Park, Maryland.

"Had Effa Manley’s real life ever been submitted as a Hollywood script, it would have been rejected as too far-fetched. Effa was part temptress, part civil rights crusader, and all shrewd and calculating businesswoman. In the capable hands of esteemed blackball historian Bob Luke, her life story becomes symbolic of the Negro leagues themselves: cool, defiant, and incandescent. What a great read!"—Timothy M. Gay, author of Satch, Dizzy & Rapid Robert: The Wild Saga of Interracial Baseball before Jackie Robinson
"I played for Effa Manley and the Eagles for nine years. Bob Luke tells what it was like for myself and my teammates to play in the Negro leagues for that remarkable woman. Luke’s book brings back many memories."—Monte Irvin, Baseball Hall of Famer
"Before the color line was broken, Effa Manley was ‘Queen of the Negro leagues.’ Bob Luke has written a gem of a book. He restores Manley to our memory with all her complexity and controversy. Here is a biography about business, beauty, and baseball. Her life rides the wings of the Newark Eagles once again. The Most Famous Woman in Baseball is about a woman who was fabulous if not furious at times. Manley loved baseball, and we should all be grateful to her contributions to the American Pastime."—E. Ethelbert Miller, director of the Afro-American Studies Resource Center at Howard University and author of The 5th Inning