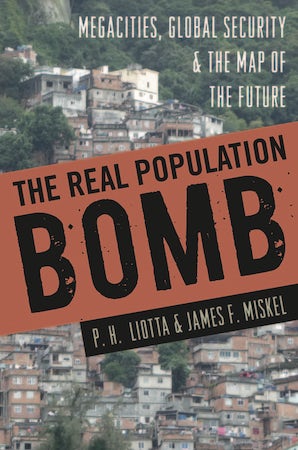 Megacities, Global Security & the Map of the Future

Shocking in description and crammed with detail, this book is about where and how geopolitics plays out in the twenty-first century. Drawing on the authors’ three decades of international field work and seasoned policy analysis, The Real Population Bomb hits like a pile driver. Its essential truths can no longer be ignored: we have never been here before in human history. The choices we make in this next decade will determine the fate of human societies.By 2025, twenty-seven cities will have populations greater than ten million and over six hundred cities will have populations greater than one million. Specific megacities, intimately connected to globalization, are posing huge security challenges—now. Liotta and Miskel focus intensely on effects these massive, underserved, and undergoverned cities have on international stability, human security, and environmental degradation, and offer strategies and solutions for mitigating those effects. Their stark, often stunning, portraits of major urban centers in Africa, Asia, the Middle East, and South America illuminate how megacity Leviathans are redrawing the map of the future—in ways that affect us all.You may not agree with this book’s message. But it will prove difficult to forget.

P. H. Liotta is the Thomas Hawkins Johnson Visiting Scholar at the United States Military Academy, West Point, New York. His eighteen books include poetry, translation, and a novel about Iran, Diamond's Compass. As a member of the United Nations Intergovernmental Panel on Climate Change, he shared the 2007 Nobel Peace Prize.

"The Real Population Bomb is a persuasive and powerfully written call to action. Urban planners, antipoverty specialists, and anyone concerned about the state of the world will find it informative and instructive."—The Futurist Magazine & World Future Society
"This book could not be more timely. The backdrop to the ongoing upheaval in the Greater Middle East and beyond is the reality of young men without jobs or prospects living in the poor, fetid cities of the developing world. Here is where world politics in the twenty-first century will be played out."—Robert D. Kaplan, senior fellow, Center for a New American Security; author, The Coming Anarchy: Shattering the Dreams of the Post Cold War
"With stunning information, notable depth, and originality, Liotta and Miskel make a major contribution to unraveling the paradox—and dangers—of rapid population growth in major urban centers."—Mohamed Tawfic Ahmed, professor of environmental science, Suez Canal University; lead author, Achieving Environmental Security: Ecosystem Services and Human Welfare
"This lucidly written book chronicles twenty-first century challenges posed by unsustainably large and growing megacities, which can drain entire regions not just of people, but their ability to cope. Liotta and Miskel don’t just offer description and analysis, but remedies as well. From NGOs to aid agencies to policymakers, everyone with a stake in the future should take note."—Anna Simons, professor of defense analysis, Naval Postgraduate School; coauthor, The Sovereignty Solution
"If you were to consider just the backgrounds of these two authors, you’d probably start heading for the exit—fast. One is a Marxist poet and novelist; the other is a policy wonk who served as director on the National Security Council for two Republican administrations. Yet The Real Population Bomb is a marriage made in heaven precisely because of such contrary backgrounds. Out of such inevitable tension comes a masterwork of passion, purpose, and persuasion. This is a book that will inspire you—and scare the hell out of you. I guarantee you will never see the world in quite the same way ever again."—Katherine Quinn, founder and president, Anthony Quinn Foundation