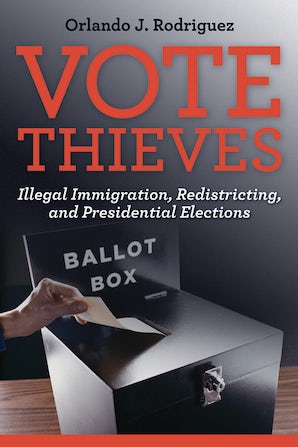 Every ten years political representation in the U.S.House of Representatives is redistributed (reapportioned) among the fifty states.The process began anew with the 2010 census, which is counting the nation’s population as the basis for reapportionment.The decennial census has a history wrought with failures and inaccurate counts.In Vote Thieves, geographer Orlando J. Rodriguez shows how our current method of apportionment creates an incentive for illegal immigration and polarizes our political system. Historically it caused the end of the Federalist Party, bolstered slavery, disenfranchised African Americans after Reconstruction, fostered segregation in the South, denied voting rights to women, and disenfranchised voters in the presidential election of 2000. Since 1989, six congressional bills have attempted to change the population basis for apportionment; none passed. Currently under review in Congress, House Joint Resolution 53 would amend the Constitution to include only citizens in the apportionment base.The 2008 presidential platform of the Republican Party included a similar call to change the apportionment basis. This issue affects all U.S. residents—legal and illegal alike.Recent history has triggered a growing suspicion among Americans that their political system is flawed. Vote Thieves explains a singular flaw that voters suspect but cannot put in plain words, and gives them the information they need to petition for a more responsive political system.

Orlando Rodriguez is a geographer and former manager of the Connecticut State Data Center at the University of Connecticut, and was a Peace Corps volunteer in Ecuador. His reports on the impact of illegal immigration on apportionment have been widely covered by the media, and his knowledge of population issues has been used as expert testimony in federal court. Rodriguez is currently employed as the Policy Director for the Latino and Puerto Rican Affairs Commission in Connecticut. He obtained degrees from Louisiana State University and the Ohio State University. He lives in Willington, Connecticut.

“After the many decades of struggle and the millions of dollars expended to defend minority voting rights, along comes Orlando Rodriguez with a somewhat counterintuitive notion that can very well reverse the sad chronicle of disenfranchisement in America. Rodriguez makes a very compelling argument. Voter-based apportionment and elimination of the Electoral College would develop America into a true participatory democracy.”—Luis C. Cabán, board member, United States Hispanic Leadership Institute
“Vote Thieves provides a provocative and nuanced account of the history of the relationship between immigration and congressional apportionment in the United States. Orlando Rodriguez offers an important and original argument for a new way of redistricting and calculating congressional apportionments based on voter counts. His book challenges traditional conceptions of representative democracy and promises to open the door for new debates over the nature of national representation and apportionment.”—Charles R. Venator-Santiago, assistant professor, Department of Political Science and the Institute of Puerto Rican and Latino Studies, University of Connecticut