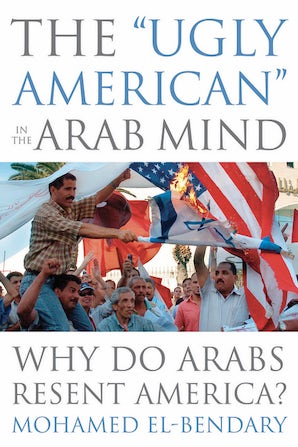 The "Ugly American" in the Arab Mind

Why Do Arabs Resent America?

How do Arabs view America? How do Arabs learn about America? The answers to these questions have assumed tremendous importance since 9/11,because therein lies the key to influencing Arab opinion of the United States in a favorable direction. Attainment of this goal has, thus far, eluded diplomats, foreign policy experts, and military strategists.

America is losing the all-important struggle for the hearts and minds of Arabs, according to El-Bendary, because of what Arabs call its aggressive nationalism and militarism, unwavering support for Israel, and failure to improve relations with Muslim nations and peoples. Regrettably, the United States seems to have lost the moral high ground in the Arab world. According to intelligence analysts, counterterrorism specialists, and American diplomats, there is an urgent need on the part of U.S. politicians, private institutions, and ordinary Americans to understand the Arab mind better, along with the cultural and political forces that shape its way of thinking. Understanding the way Americans and the United States are portrayed in the Arab media, which influences Arab views, is a critical first step in this undertaking, and El-Bendary provides access to these sources that have, until now, been inaccessible to those who do not understand Arabic.

Mohamed El-Bendary holds an MA in journalism and public affairs from the American University in Washington, D.C.; a postgraduate certificate in Arabic-English translation studies from the University of Westminster in London; and a BA in media communications from Webster University in St. Louis, Missouri. He has taught journalism and international relations in the United States and New Zealand. Now an independent journalist, he has published dozens of articles in major American newspapers. He is the author of The Egyptian Press and Coverage of Local and International Events (Lanham, MD: Lexington Books, 2010). He lives in Benha, Egypt.

“This book is an engaging, detailed, thought-provoking, and critical analysis of how America is perceived in the Arab world. But the book also teaches a bigger lesson. Global relations are shaped as much by ideas, values, and perceptions as they are by power, money, and institutions. El-Bendary has produced an excellent resource for students, professionals, and anyone interested in America's foreign policy as well as Middle Eastern and global affairs.”—Eric Shiraev, professor and senior research associate at George Mason University
“Mohamed El-Bendary's thoughtful and learned compendium arrives at a critical juncture in American-Arab relations. Students and policymakers alike would be hard-pressed to find a tighter or more well researched study of Arab attitudes, opinions, and feelings about the United States, its leaders, and its people. Some readers may find themselves disagreeing with some of the author’s ideas and claims, but everyone, regardless of nationality or political leaning, will gain from exposure to El-Bendary's top-flight work.”—David D. Perlmutter, director of the School of Journalism and Mass Communication and professor and Starch Faculty Fellow, College of Liberal Arts & Sciences, The University of Iowa
“Mohamed El-Bendary provides a thought-provoking discussion about Arabs’ attitudes toward the United States. In this lucidly written book, he appraises the change of these attitudes over time, drawing on a wealth of Arabic news clips and commentaries.”—Noha Mellor, reader in media studies, Kingston University London
“In this extremely timely and much-needed book, Mohamed El-Bendary uses the prism of the Arab media to analyze the Arab and American cultural misunderstandings, stereotypical images, and mutual resentments that have plagued Arab-American relations for decades. This well-written, well-researched, and informative volume will hopefully contribute to thoughtful, more realistic reassessments of American foreign policy toward the Middle East, Arabs, and Muslims. It is a must-read for all media and international students, scholars, researchers, professionals, activists, and foreign policy experts.”—Yahya R. Kamalipour, professor/head, Dept. of Communication & Creative Arts; director, Center for Global Studies, Purdue University Calumet; founder/managing editor, Global Media Journal
“Mohamed El-Bendary’s book is a beautifully written, thoroughly documented, and very readable investigation of how the Arab media interpret American political actions within the dynamically changing Arab world of the early twenty-first century. He offers plenty of evidence for why America is perceived as the elephant in the room of Middle Eastern politics. His insights provide the English-speaking world with a way to understand the hearts and minds of Arab peoples by inviting readers to experience the conversations taking place between Arab peoples and their media about American politics and leaders. In this way he allows readers into the heartland of the hopes, aspirations, and concerns of the Arab peoples.”—Lisa Chant, lecturer in politics, media, and indigeneity, University of Auckland, New Zealand
“This well-researched, coherent, and forthright account of Arab opinion of America is both cogent and chilling. Middle Eastern suspicion of U.S. policy in the region from well before 9/11 is well documented. But El-Bendary, an Egyptian analyst and former journalist, has been uniquely placed to observe and record the relationship through Arab eyes. That he does this so dispassionately and fairly is, frankly, remarkable. He deserves a wide audience, including in the rarefied air of American governance.”—Alan Samson, journalism lecturer, Massey University, Wellington; and research associate, Pacific Media Centre, Auckland, New Zealand