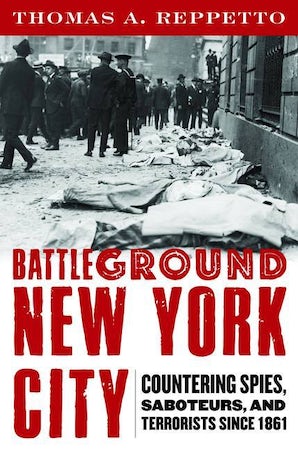 Countering Spies, Saboteurs, and Terrorists since 1861

New York City has long been a breeding ground for spies, saboteurs, terrorists, and other threats to the nation and its greatest city. Battleground New York City examines the history of domestic security operations and the people and agencies involved in safeguarding “the city that never sleeps.” Starting with the bloody draft riots during the Civil War, Thomas Reppetto guides the reader through New York City’s history, emphasizing the battles against twentieth-century German and Russian spies and more recent ones against Islamic radicals. This book illustrates how, over the course of two world wars, numerous political and social upheavals, and shocking terrorist attacks, the United States developed a complex web of organizations responsible for identifying and neutralizing security risks. New York has been the training and proving ground for law enforcement agencies in developing the organizations, strategies, and tactics now used to protect citizens nationwide. The histories and operations of the U.S. Secret Service, the Federal Bureau of Investigation, the New York Police Department, and other organizations provide insight into recent events and what the United States needs to do to protect all of its citizens. Battleground New York City is the exciting story of the men and women who have dedicated their lives to protecting a city under threat.

Thomas A. Reppetto, a former Commander of Detectives in the Chicago Police Department, received his doctorate from Harvard and was a professor, dean and vice-president at the John Jay College of Criminal Justice in New York City.

"Thomas Reppetto is uniquely qualified to assess America’s police intelligence apparatus, history, and evolution because of his role as a historian and practitioner, and above all else, because of his talent as a writer. His Battleground New York City proves a masterful, immensely readable, and breathtakingly authoritative analysis of the challenges that U.S. law enforcement has faced over the past 150 years. It stands alone."—Tony Bouza, former commander, New York Police Department, and chief of police, Minneapolis Police Department; author of Police Intelligence: The Operations of an Investigative Unit
"Tom Reppetto’s Battleground New York City is a fascinating look at how the greatest law enforcement agency in the United States dealt with saboteurs, bombers, and terrorists long before there was an FBI or CIA. The book is chock full of characters and incidents that jump off the page, providing an interesting and entertaining historical narrative. This is an invaluable contribution to our American law enforcement library."—John Timoney, former first deputy commissioner, New York Police Department; police commissioner, Philadelphia Police Department; chief, Miami Police Department; author of Beat Cop to Top Cop
"Thomas Reppetto [is] perhaps the country's foremost police historian. . .[Battleground New York City is the] authoritative account of the city's efforts to counter spies, saboteurs and terrorists who have plotted against New York since 1861."—Len Levitt, from his Huffington Post column, July 10, 2012