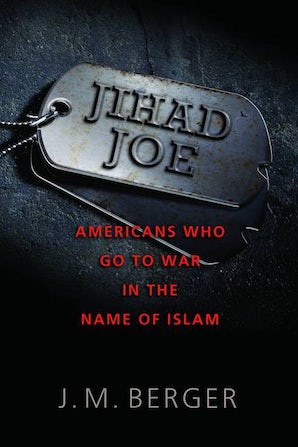 Americans Who Go to War in the Name of Islam

They are Americans, and they are mujahideen. Hundreds of men from every imaginable background have walked away from the traditional American dream to volunteer for battle in the name of Islam. Some have taken part in foreign wars that aligned with U.S. interests, while others have carried out violence against Westerners abroad, fought against the U.S. military, and even plotted terrorist attacks on American soil. This story plays out over decades and continents: from the Americans who took part in the siege of Mecca in 1979 through conflicts in Lebanon, Afghanistan, and Bosnia, and continuing today in Afghanistan and Somalia.

Investigative journalist J. M. Berger profiles numerous fighters, including some who joined al Qaeda and others who chose a different path. In these pages he portrays, among others, Abdullah Rashid, who fought the Soviets in Afghanistan; Mohammed Loay Bayazid, who was present at the founding of al Qaeda; Ismail Royer, who fought in Bosnia and Kashmir, then returned to run training camps in the United States; Adam Gadahn, a Jewish Californian who is now al Qaeda’s chief spokesman; and Anwar Awlaki, the Yemeni-American imam with links to 9/11 who is now considered one of the biggest threats to America’s security.

J.M. Berger is the author of Extremism (MIT Press, September 2018) and a research fellow with VOX-Pol. An analyst studying extremism, terrorism, propaganda and social media analytical techniques, Berger's previous works include ISIS: The State of Terror, with Jessica Stern, and Jihad Joe: Americans Who Go to War in the Name of Islam.

“Investigative journalist and documentary filmmaker Berger lifts the veil on the phenomenon of American jihadists in this timely and chilling examination. … Berger's exposé painstakingly lays out the scope and character of the American jihadist movement and points the way to a national debate on solutions.”—Publishers Weekly
"At a time when some politicians and pundits blur the line between Islam and terrorism, Berger, who knows this subject far better than the demagogues, sharply cautions against vilifying Muslim Americans. "Extreme and indiscriminate anti-Muslim rhetoric helps to validate the worldview of our enemies – the premise that America's wars are indeed wars against Islam," Berger writes. "You cannot tell someone, 'You are my enemy,' and then blame them for believing you."

It is a timely warning from an expert who has not lost his ­perspective."—Scott Shane, New York Times Book Review
"How these American jihadists became radicalized, recruited and trained, and the types of terrorist activities they conducted (and still engage in) whether abroad or in America, constitute the core of Mr. Berger’s important book."—Joshua Sinai, Washington Times Book Review
“A fascinating journey into the rise, expansion, and future of American jihadism. J. M. Berger goes beyond the Awlaki mania to investigate firsthand the changing nature of the terrorist threat to the United States.”—Jean-Charles Brisard, former chief investigator for the 9/11 families’ lawsuits
“A must-read insight into America’s Muslim ‘holy warriors.’ J. M. Berger tracked down the families and former associates of U.S. citizens who turned to jihad and violence, and asked a key question: why? Jihad Joe is meticulously researched and refreshingly free of rhetoric.”—David Hebditch, documentary filmmaker and coauthor of How to Stage a Military Coup
“Jihad Joe is a hell of a book—authoritatively reported, well sourced, and painstakingly researched. This is required reading for anyone seeking to understand the true nature of the terrorist threat that confronts us. Berger has succeeded in producing a timely work that will tell readers something they didn’t know about the topic, whether they are everyday people or those well versed in the subject.”—Josh Meyer, former terrorism/national security reporter, Los Angeles Times, and director of education and outreach, Medill National Security Journalism Initiative, Northwestern University