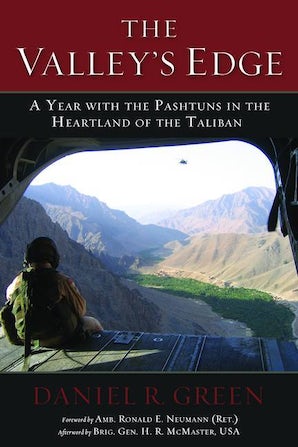 A Year with the Pashtuns in the Heartland of the Taliban

In this gripping, firsthand account, Daniel Green tells the story of U.S. efforts to oust the Taliban insurgency from the desolate southern Afghan province of Uruzgan. Nestled between the Hindu Kush mountains and the sprawling wasteland of the Margow and Khash Deserts, Uruzgan is a microcosm of U.S. efforts to prevent Afghanistan from falling to the Taliban insurgency and Islamic radicalism.

Upon returning to Afghanistan in 2009 with the U.S. military and while working at the U.S. Embassy in Kabul until 2010, Green discovered that although many improvements had been made since he had last served in the country, the problems he had experienced in Uruzgan continued despite the transition from the Bush administration to the Obama administration.

"Dan Green spent a fascinating year in the heart of Taliban country as the insurgency began to gather steam there. His valuable book is a rich and detailed assessment of what worked (and what didn’t) to pacify Uruzgan, one of the most dangerous and remote provinces in Afghanistan."—Peter L. Bergen, author of The Longest War: The Enduring Conflict between America and al-Qaeda
"Dan Green provides a unique and insightful perspective on the war in Afghanistan. He takes a sympathetic but critical look at our efforts there and the challenges that remain for the U.S. to prevail in Central Asia. If you want to know what Americans are doing in Afghanistan, read The Valley’s Edge."—Amb. James Dobbins, special envoy for Afghanistan
"A blunt, detailed account from the frontlines that describes why nation-building is so astoundingly difficult—if not impossible. A warning in bold, human terms about the stultifying effects of military and civilian bureaucracies, no matter how well intentioned they are."—Bing West, former assistant secretary of defense and author of The Village, The Strongest Tribe, and The Wrong War
"Dan Green has provided us with a rare and insightful look at the ground-level efforts for reconstruction in the dangerous south of Afghanistan. He cuts through the fog of war to give us a clear image of where we’ve succeeded, balanced by the honest assessment of where we have failed. Combine that with a civilian perspective of a man, not embedded with, but working alongside the U.S. and coalition forces, and what you have in your hands is a must read for anybody hoping to understand the hard realities of the war in Afghanistan."—Eric Blehm, author of The Only Thing Worth Dying For and The Last Season
"You've read the theory of counterinsurgency—now see it in practice. Dan Green's memoir is a bracing account of the hazards of state-building in Afghanistan."—Nathan Hodge, author of Armed Humanitarians
"The Valley’s Edge is a moving, finely grained portrait of an American's efforts to understand and help Afghanistan from within a well-intentioned but often hapless U.S. bureaucracy. Dan Green's memoir of his tour as a civilian adviser in Uruzgan Province makes a signal contribution to the literature on the war and in particular to understanding the role of this southern Pashtun province in the ongoing conflict. It is ground-level, first-person history at its best."—Linda Robinson, author of Tell Me How This Ends and Masters of Chaos