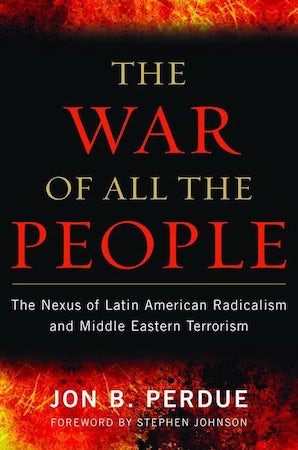 The War of All the People

The Nexus of Latin American Radicalism and Middle Eastern Terrorism

The War of All the People elucidates the ideological and political war against the United States, capitalism, and the widely accepted tenets of modernity. Spearheading this war are Hugo Chávez of Venezuela and Mahmoud Ahmadinejad of Iran, two “revolutionary” leaders who have forged an active alliance hell-bent on destroying the established order in the developed world. Adopted as the operative name of his war on U.S. “imperialism,” the “War of All the People” is Hugo Chávez’s plan to supplant U.S. dominance in the hemisphere with “twenty-firstcentury socialism.” Although U.S. presidents and policymakers have treated Chávez’s antics with benign neglect thus far, his 2010 missile accord with a soon-to-be nuclear Iran has escalated the threat to an unavoidable level. Chávez’s ability to thwart sanctions on Iran by providing oil, and possibly uranium, to the corrupt regime makes his bluster more sinister than the simple rant of a third world caudillo.

The War of All the People goes beyond merely pondering the unlikely alliance between seemingly antithetical cultures. Scholars, students, and policymakers will learn about the long history of cooperation between Middle Eastern and Latin American terrorist groups, from the radical mecca of Algiers in the 1960s, where Che Guevara and Amilcar Cabral both resided, to the Tricontinental Conference in Cuba in 1966, which first brought Fidel Castro and Yasser Arafat together.

“Whether we like it or not and whether we want it or not, the United States and the other countries of the West are engaged in several ‘wars of all the people.’ These undeclared wars can compel radical and unwanted political-economic-social change, and even if that compulsion is generally indirect and not as lethal as conventional maneuver war, that does not alter the cruel reality of compulsion. Rationality dictates that it is time to take seriously the evidence and analysis that Jon Perdue presents.”—Max G. Manwaring, professor of military strategy, Strategic Studies Institute, U.S. Army War College
“From the Middle East to Latin America, much of the conflict and subversion that threaten the West today is the direct result of many decades of collaboration and training by the former Soviet Union and its allies. Many of us who defected from Soviet espionage agencies tried to warn the West, but far too often we were ignored. In this long-overdue investigation into the history of this collaboration, Jon Perdue reveals the vast number of these connections that still operate today. This essential analysis belongs in the library of all counterterrorism and security professionals.”—Evgueni K. Novikov, former KGB agent and author of Rethinking the Reset Button
“Developments south of our border increasingly threaten American security, and none more so than the growing alliance there between Latin American extremists and the forces of radical Islam. In The War of All the People, Jon Perdue sheds light on this sinister synergy, and on the doctrine of “peripheral warfare” embraced by regional leaders like Hugo Chávez and Fidel Castro that has made it possible. In doing so, he lays bare the dangers now facing the United States in its own hemisphere.”—Ilan Berman, vice president, American Foreign Policy Council