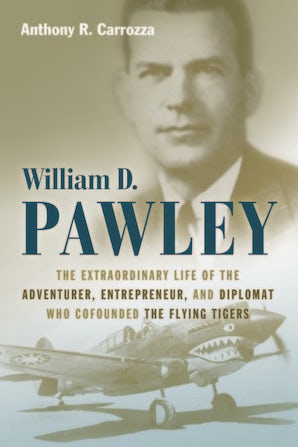 The Extraordinary Life of the Adventurer, Entrepreneur, and Diplomat Who Cofounded the Flying Tigers

William Douglas Pawley was a cross between Indiana Jones and Donald Trump. A self-made millionaire with little education, he immersed himself in whatever business venture he chose and usually came out on top. As a sales representative for the Curtiss-Wright Corporation, Pawley traveled to China in the 1930s and positioned himself as the single source of American military aircraft for the Chinese government. Eventually he worked to support the Flying Tigers, the American volunteers flying for the Chinese Air Force, and built an airplane factory in India to give the Allies air power in Asia.

President Harry Truman appointed Pawley ambassador to Peru (1945–1946), and to Brazil (1946–1948). When Dwight Eisenhower ran for president, Pawley switched parties, campaigned for Ike, and was later assigned to the State Department. During this period, he dealt with world leaders on sensitive national security matters, such as backdoor diplomacy in the Dominican Republic under Rafael Trujillo, in Cuba at the time of Fidel Castro’s takeover, and in a plot to overthrow the Guatemalan government in 1954. Later, in an effort to discredit President John Kennedy, Pawley financed Operation Red Cross, a secret effort to help Russian missile officers defect from Cuba to the United States. This episode, involving a cast of characters from Mafia members to soldiers of fortune, was one of many in an adventurous life story nearly beyond belief.

Anthony R. Carrozza’s in-depth biography looks at the extraordinary life of a man whose work influenced thirty critical years of American and international relations during World War II and the Cold War.

"William Pawley is hardly a household name, but he was the consummate Cold War adventurer, diplomat, businessman, and wheeler-dealing American patriot. Anthony Carrozza’s biography of this extraordinary man offers a behind-the-scenes glimpse of the conspiracy and intrigue that characterized private and public U.S. operations overseas during the tumultuous middle years of the twentieth century."—Tom Gjelten, author of Bacardi and the Long Fight for Cuba
"A masterful account of one of the most influential political players of the twentieth century. A man of many talents, William Pawley made his mark as both a diplomat and adventurer, with friends in high places around the world.”—Don Bohning, author of The Castro Obsession: U.S. Covert Operations against Cuba: 1959–1965
“An energetic, flawed anticommunist businessman with a central—if often unofficial—role in U.S. foreign policy adventures from World War II China to revolutionary Cuba, Pawley makes for a fascinating subject. Backed by massive research, including access to Pawley family papers and interviews, Carrozza spins a fast-paced narrative that will delight anyone interested in diplomacy, war, or the spread of U.S. economic influence abroad.”—Alan McPherson, associate professor of international and area studies, University of Oklahoma, and author of Intimate Ties, Bitter Struggles: The United States and Latin America since 1945