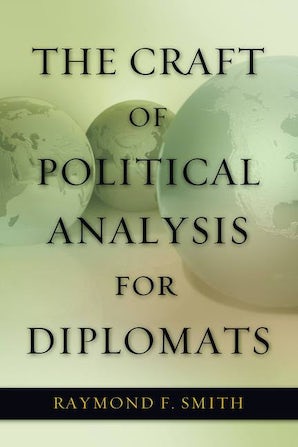 The Craft of Political Analysis for Diplomats

Until the recent unauthorized release of thousands of classified State Department cables, public attention was rarely drawn to the frequently outstanding political analysis done by American diplomats abroad. The existing literature on diplomacy has heretofore been limited to memoirs of former diplomats and analyses of international affairs by diplomats, academics, and think tanks. The Craft of Political Analysis offers a fresh approach, one that provides a context for interpreting this embassy reporting and a guide to understanding the work that went on behind the scenes to produce it. Author Raymond F. Smith combines a practitioner’s personal view of what is required to do good diplomatic political analysis with his understanding of the social conflict and change that informed his work for the State Department. Smith clearly explains everything the Foreign Service candidate or professional, as well as the interested layman, needs to know about crafting political analysis, including how to write for the analyst’s intended audience, how to make best use of the intellectual and analytical tools of the trade, what happens when the analyst’s views differ from government policy, and why political analysis risks becoming irrelevant, even though it is still urgently needed. In addition, The Craft of Political Analysis for Diplomats features two case studies using legally declassified cables not included in the Wikileaks release. The first is built around four highly restricted Embassy Moscow cables on the collapse of the Soviet Union; the second includes two cables on the Arab-Israeli conflict that received the State Department’s highest award for political analysis. Selected for the Diplomats and Diplomacy Series of the Association for Diplomatic Studies and Training (ADST) and DACOR, an organization of foreign affairs professionals.

Raymond F. Smith worked for the State Department for several decades, primarily doing political analysis, before retiring with the rank of minister counselor in the Senior Foreign Service. He held two of the most significant analytical jobs in the State Department: minister counselor for political affairs at the U.S. Embassy in Moscow and director of the Office of Russian, Central Asian, Caucasus, and Eastern European Affairs, Bureau of Intelligence and Research. He is the author of Negotiating with the Soviets (Indiana University Press, 1989). He lives in Dallas, Texas.

"A candid and insightful introduction to the diplomatic profession, this handbook explains how to use one's personal compass to navigate the winds of politics and bureaucracy. Smith reveals much about the obstacles, biases, and games that limit the reach of our finest reporting officers and sheds light on the unique cultural and relationship tools they possess. Richly illustrated with cases and quotes—including examples from his own Soviet and African experiences—this book sets an analytical standard to which his former colleagues and successors should aspire."—Chester Crocker, former assistant secretary of state for African affairs and professor of strategic studies, Georgetown University’s Walsh School of Foreign Service
"Well worth reading for aspiring Foreign Service officers, for those who want to understand the functions of today's diplomats and the skills they need, and for those who want to look behind Wikileaks to understand the craft and purpose of diplomatic reporting."—Amb. Ronald E. Neumann, president, American Academy of Diplomacy; former U.S. ambassador to Algeria, Bahrain, and Afghanistan; and author of The Other War: Winning and Losing in Afghanistan
"This concise, well-written book packs in a lot of information and insights into the craft of diplomacy in the past and its evolution in the twenty-first century. A must-read for those joining or already part of the diplomatic service and for foreign affairs scholars, who will be particularly interested in what the book has to say about political analysis."—Carol Lancaster, dean, Georgetown University School of Foreign Service