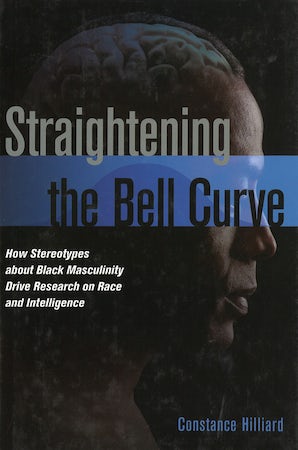 How Stereotypes about Black Masculinity Drive Research on Race and Intelligence

Straightening the Bell Curve offers a new way of looking at the distressingly persistent subject of intelligence research as it relates to race and gender. Constance Hilliard’s premise—that researchers preoccupied with proving racial hierarchies often sacrifice scientific truth to masculine insecurities—rests on her examination of works of historical and contemporary figures in the field of racial research. Based on this thesis, Straightening the Bell Curve explores the emotional fixations concealed behind the presumably rational ones that propel otherwise clearheaded researchers to ignore elemental flaws in their conceptions as they set out to prove the cognitive inferiority of African Americans.The tendency to justify racial and cultural stereotypes on the grounds that they reflect underlying biological differences has a long and controversial history in America. As far back as the eighteenth century, new areas of scientific research employed craniology and craniometry in an attempt to “document” black inferiority. This scholarly preoccupation with measuring skull sizes emerged concomitant with two important developments: the solidifying of the trans-Atlantic slave trade and the deep-seated fear among Europeans that Africans possessed larger sexual organs than they. Thus, craniologists came to the rescue of their anxious male patrons, insisting that the price Africa’s “oversexed savages” paid for being well endowed was cognitive underdevelopment, confirmed through bogus skull measurement experiments.Constance Hilliard’s compelling argument aims to change forever the way American society sees research purporting to identify racial differences in cognition and will alter irrevocably the way we view individuals who insist on believing such pseudo-scientific conclusions. This book detonates a debate that will weaken the last barriers standing between America’s fractured racial past and its future promise.

CONSTANCE HILLIARD is an associate professor of history at the University of North Texas, specializing in the history of race science in addition to teaching courses on the Middle East and Africa. She lives with her husband and son outside of Dallas, Texas.

"[A] short but important book."—Choice, December 2012
"A remarkably engaging book. It is also a ‘must-read’ for scholars in the fields of race relations, IQ research, as well as public and higher education for minorities. Professor Hilliard exposes the shamefully raw underbelly of research purporting to show racial differences in intelligence, uncovering the myths and misconceptions and the personal biases of some authors. This is a seminal work that will undoubtedly alter the way mainstream scholars and the public at large view such pseudoscientific research and the people who engage in it. I strongly recommend it."—Dr. Joyce Ladner, African American sociologist; author of Launching Our Black Children for Success
"A book that is difficult to set aside once opened, with its clear, crisp, and highly readable writing style. Hilliard’s strength is her ability to reach into the published writings of various experts on race, gender, and IQ research, and discover their private worlds."—Dr. John Haller, Emeritus Professor of History and Medical Humanities, Southern Illinois University; author of Outcasts from Evolution
"In Straightening the Bell Curve, Constance Hilliard goes where no one dared go before. She asks fundamental questions: Why did race and IQ researchers focus on African American male sexual physiology? Why did they draw false correlations between their distorted perceptions of the former with their own limited vision of intelligence? She provides us with important answers that illuminate the struggle between method and motivation. This is a book I wish I had written myself."—Dr. Joseph Graves, professor of biological science and Associate Dean for Research at the Joint School of Nanoscience & Nanoengineering, Greensboro, North Carolina; author of The Race Myth
"Straightening the Bell Curve is far more than a critique of pseudoscientific claims regarding intelligence and race. It is an intriguing examination of the centuries-old obsession with ‘racial’ intelligence by a small subset of the scientific community. Hilliard deftly turns the lens from the claims themselves, which have been thoroughly discredited by the vast majority of the scientific community who debunk ‘race’ as a major human variable, and instead analyzes the mindset of those who still embrace such claims in the face of overwhelming evidence to the contrary. In doing so, she provides a fascinating account of why race still matters to men considered some of the best minds of the contemporary age and how such theories are employed in the service of specific social and political agendas."—Dr. Quintard Taylor, professor of American history, University of Washington; author of In Search of the Racial Frontier: African Americans in the American West, 1528–1990 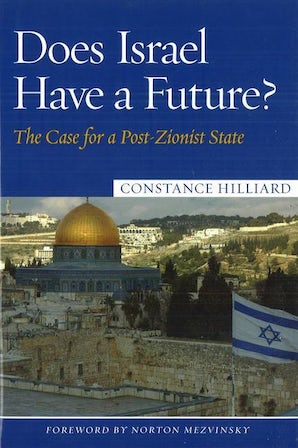 Does Israel Have a Future?